The Kul Sharif Mosque is one of the symbols of Kazan and the existing Djuma Mosque of Tatarstan, located in the western part of the Kazan Kremlin and is included in the historical and architectural complex included in the UNESCO World Heritage List. Entrance to the existing mosque is free for all. Women are required to cover their heads with a scarf: you can take scarves and capes for free at the entrance. You also can not enter the mosque with open knees and shoulders (applies to both women and men). 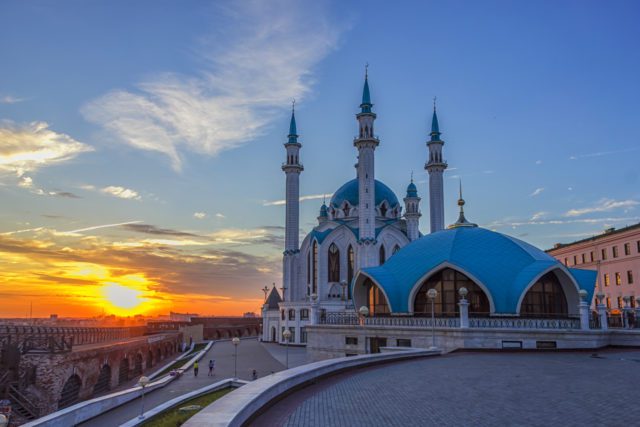 Mosque of al-Mardzhani in Kazan

The Al-Mardzhani Mosque in Kazan, also known as the First Cathedral, Yunusovskaya or Efendi (Lord), is one of the first mosques in the city, which was founded in the 1770s. The mosque is included in the complex of attractions of the Old Tatar settlement. Mardzhani Mosque is open to tourists, but only with the observance of certain rules common to all religious Islamic attractions. When visiting a mosque, women need to be in closed clothes, a long skirt and a head covered with a handkerchief are obligatory. Shoes, all tourists, without exception, must leave at the entrance to the mosque. During prayers to tourists, the entrance to the mosque is limited, as the mosque must accommodate all Muslim believers.

Temple of all religions

In the village of Old Arakchino, there is a miraculous creation, the purpose of which is to unite all religions under one roof. It is called the Temple of All Religions, also the Ecumenical Temple, the International Cultural Center for Spiritual Union. According to the idea of ​​Khanov, the creator of the temple, the new building was supposed to include elements of all major religions. The architect and esoteric sought to demonstrate to all people that God is one and there is no point in conducting lengthy disputes over the separation of religious views. In his work of construction, many religions intertwine so successfully, creating a general, inspired picture that it is already difficult to distinguish individual elements.

According to the architect’s plan, it was planned to build 16 domes and halls dedicated to various religions, including those that had disappeared in the church:

The Peter and Paul Cathedral in Kazan is one of the most beautiful monuments of Russian baroque of the first half of the 18th century. The temple is one of the centers of Orthodox of Tatarstan and is a landmark of architectural cultural and historical attraction of Kazan. Since the cathedral is valid, admission to it is free for all. You can visit the temple every day from 7:00 to 18:00, including during the hours of worship. 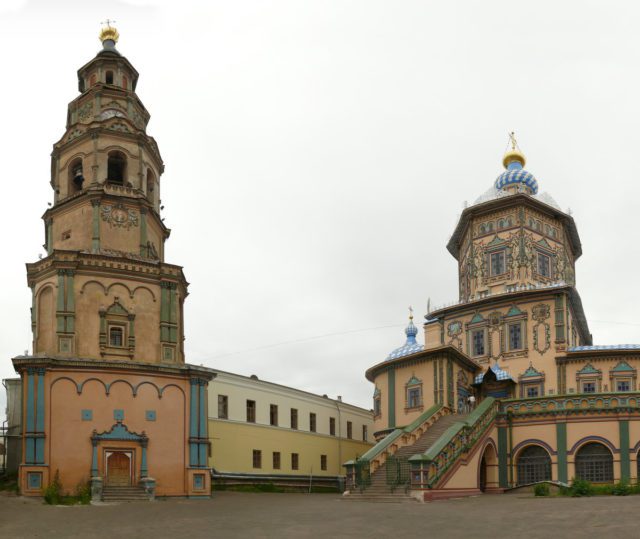 The Annunciation Cathedral is the oldest, preserved stone building in Kazan. It is located on the territory of the city Kremlin and is the largest building of the entire complex. From the day of its foundation and before the revolution, the Cathedral of the Annunciation was a cathedral. The complex of the Cathedral of the Annunciation also includes the buildings of the Bishops’ House, Consistories and a number of archaeological monuments. In particular, fragments of stone buildings of the XV-XVIII centuries, the remains of medieval wooden and stone pavements. The assembly takes parishioners and tourists daily from 10:00 to 18:00. Entrance to the cathedral is free. Services in the Annunciation Cathedral are held on weekends and on holidays.

The museum at the cathedral is open daily from 10:00 to 18:00 (ticket offices close at 17:30). The exposition of the museum at the Cathedral of the Annunciation includes more than a hundred exhibits, including documents and art objects telling about the history of the temple. The most valuable exhibits: ancient Orthodox books of the XVI century; icons made in different techniques and styles; the staff of the first Archbishop of Kazan and Sviyazhsky Gury.

Excursion along the exposition accompanied by a guide from the cathedral (for groups of up to 20 people) – 750 rubles.

Excursion along the exposition and excursion inside the Annunciation Cathedral – 1000 rubles.

Kazan Mother of God Monastery, located on Bolshaya Krasnaya Street in the heart of the city. For many centuries, the shrine remained the largest and most famous in the Volga region. The incredibly beautiful architectural complex, spread over several hectares in the center of Kazan, included several churches, cathedrals and chapels, as well as residential buildings, a bell tower and a parochial school building. Now the main part of the architectural ensemble is destroyed, but the monastery itself is still in operation, and work on the restoration of other buildings is ongoing. Until 1917 the monastery was female, since 2005 it is male. Currently, 9 brothers live in the building.

Catholic parish of Kazan “Elevation of the Holy Cross”

The Catholic Holy Cross Cathedral in Kazan is painted in blue with white framing, decorated with stained glass windows. Polish masters depicted the Way of the Cross on the walls, and 12 Apostles on the balcony of the choir. The altar, font and pulpit are made of granite. The church contains a statue of the Mother of God of Fatima, consecrated by Pope Paul VI, as well as a particle of the Holy Cross, many pilgrims from other cities and countries come to the shrines of the temple. On the side of the facade there is a portico on the columns, on both sides of it – the bell tower. On the turrets are Gothic spiers. Tourists celebrate the beautiful architecture of the temple, and also write that inside you can hear the music of the organ.

Services do not take place on Mondays. On other days, you can rely on the following schedule: 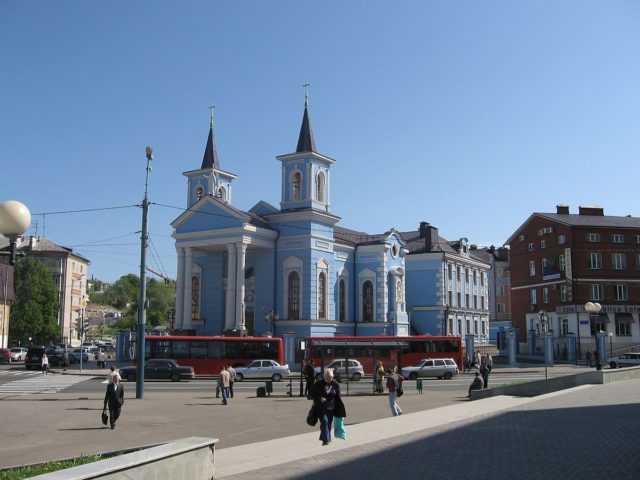 The building of the Kazan synagogue was originally built for the needs of Jewish believers. The government of Kazan Province allowed the Jewish community to purchase a private house belonging to merchant F.L. Belenkov. In 1913, the developed drawings of the reconstruction of the existing building into the prayer house were presented to the construction department of the provincial government. The project was supposed to build a house on the third floor and redevelop the interior. In addition, the two-story wing of the prayer hall was supposed to be attached to the building at a right angle. On March 12, 1915, the prayer house (synagogue) was opened, and 100 years later, in 2015, the synagogue building was completely renovated and reconstructed. The updated synagogue combines a modern interior and a traditional way. Like any other religious building, the synagogue is open for free visits to residents and guests of the city of Kazan.