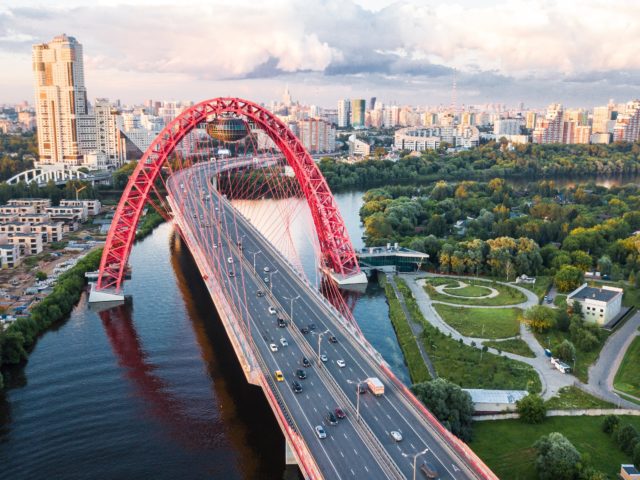 More than 500 bridges have been built in the capital. Some of them connect the shores, others hover over highways, others are designed for leisurely walks and romantic meetings. Many constructions are lost against the backdrop of urban scale and grandiosity. 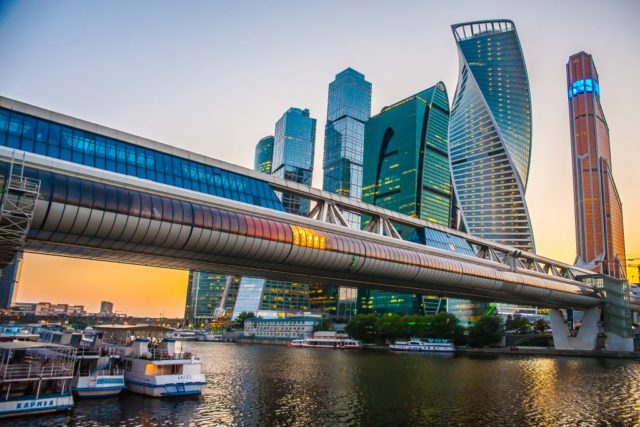 The trade and pedestrian bridge as part of the Moscow City complex was opened in 1997 on the 850th anniversary of Moscow and named after the hero of the Patriotic War of 1812 Pyotr Ivanovich Bagration, whose monument is located on Kutuzovsky Prospekt. It consists of two levels. The lower level is a covered gallery glazed throughout. The upper level is partially glazed; it has an open observation deck. Both levels are interconnected by stairs, escalators and elevators. At the moment, restaurants and cafes, a travel agency, a beauty salon, and a bowling center are open at different levels of the bridge. In one of the rooms there is a tree of wonders, which can also be used for photo and video shooting. There are a couple of pretty benches in the middle of the bridge and some lively greenery. Thanks to the views from the bridge, this bridge is also popular with newlyweds, who often come here for wedding photo shoots. 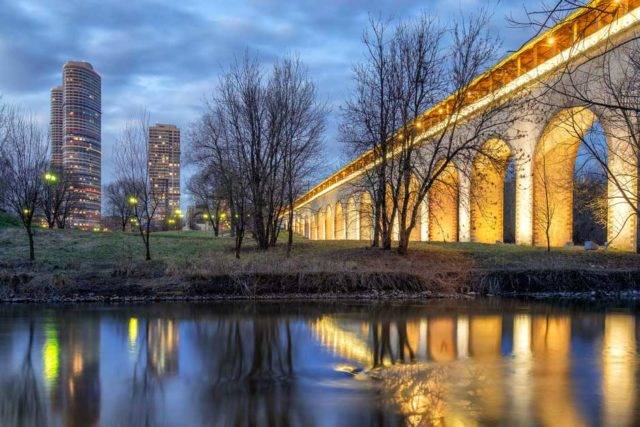 The hydrotechnical structure is one of the architectural monuments of the late 18th century. The most famous Russian aqueduct, built back in the time of Catherine II. It was built over the Yauza River to supply the city with clean water, for which a lot of government money was spent. The arched structure made of stone seems to step over the river, reminiscent of a building from antiquity. For its intended purpose (for laying a water pipeline through a ravine), the aqueduct was used until 1902. Until 2004, it served as a support for the heating main, and after restoration in 2007, it became a pedestrian bridge. The designers have added railings, a roof and a lighting system, and a recreation park has been arranged around.

The futuristic-style building was opened in 1997 and named after the hero of the Patriotic War of 1812 Pyotr Ivanovich Bagration, whose monument is located on Kutuzovsky Prospekt. It takes just 8 minutes to walk across the bridge from Presnenskaya embankment to the Moscow City business center. It is made of concrete and equipped with ventilation, air conditioning, fire alarms, surveillance cameras. On the lower closed level there are walkways and travolators. The upper tier is partially glazed. There are shopping pavilions and an observation deck. 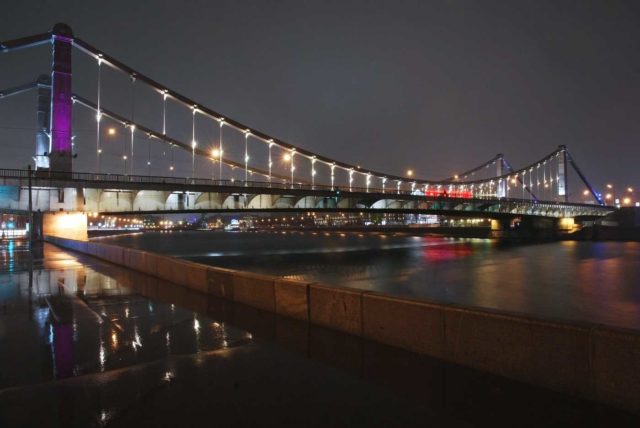 This automobile-pedestrian suspension bridge, thrown across the Moscow River on the Garden Ring highway, was opened in 1938. It got its name from the ancient Crimean ford, through which the Crimean Tatars moved on raids to Moscow. The bridge offers a beautiful view of the Frunzenskaya embankment and Gorky Park, Pushkinskaya, Krymskaya and Prechistenskaya embankments, the monument to Peter I, the Central House of Artists, located on Krymsky Val. The Crimean bridge is especially beautiful in the evening and at night. 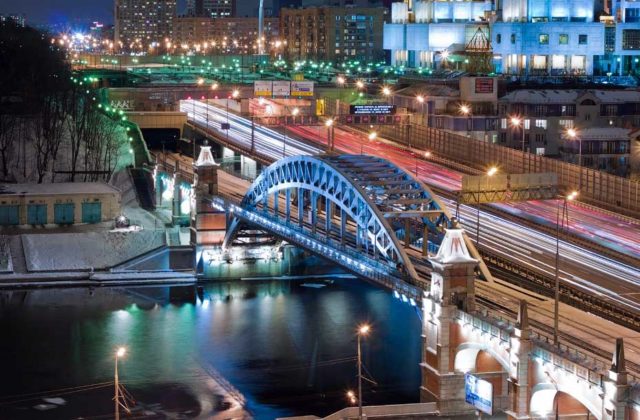 The crossing between Andreevskaya and Luzhnetskaya embankments is part of the Third Ring Road. Two bridges standing close to each other combined transport and railway functions. The structure on which the rails are laid was built in 2000 on the site of an outdated one. It is assembled on solid scaffolds by hanging mounting and supplemented with flyovers. The bridge offers panoramas of the historical center and Sparrow Hills. It can be walked from Frunzenskaya and Pushkinskaya embankments 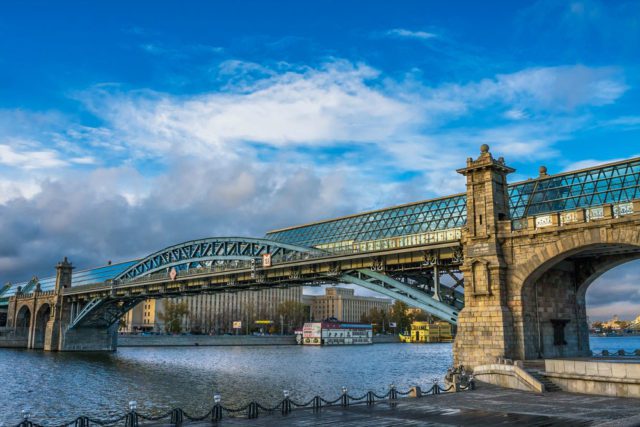 The basis of the Andreevsky bridge was the railway bridge built in 1908, which was part of the small ring of the Moscow ring railway.

In Soviet times, the bridge and the railway were practically not used, and therefore in 1999 it was moved to the territory of Gorky Park, completed and made pedestrian. The base of the bridge was delivered to the park by water, and after the construction of a modern glass crossing, the bridge became a pedestrian one. Today, a wonderful view of the Moscow River and Gorky Park opens from the Andreevsky Pedestrian Bridge. You can walk along the bridge both under the glass roof and outside. It also has an observation deck with free binoculars. From here you have a great view of the Cathedral of Christ the Savior. The Kremlin, the famous Moscow skyscrapers, the Shukhov TV tower and many other sights of Moscow. 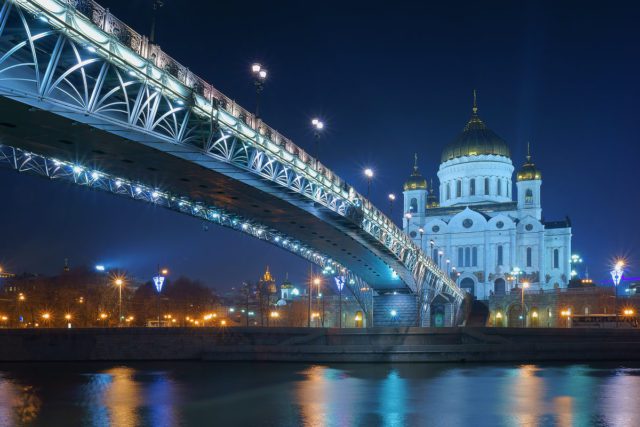 Pedestrian bridge opposite the Cathedral of Christ the Savior 203 meters long. Lanterns in the style of the 19th century provided beautiful evening illumination, and openwork railings gave lightness to the structure. The opening of the bridge took place in 2004. From it you can clearly see the Kremlin, Bolotny Island, the monument to Peter I.
This place is also famous among newly weds, here you can see many castles with the names of couples who want to perpetuate their love forever. 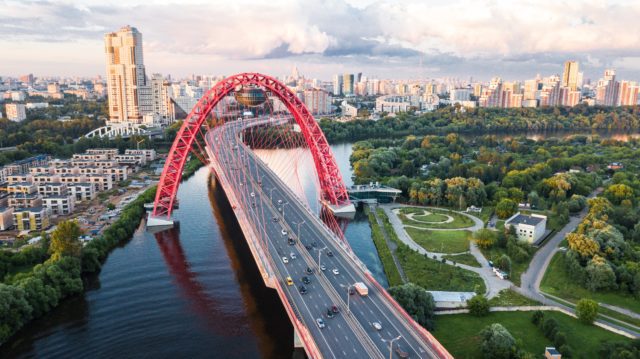 The highest cable-stayed bridge in Europe connects the protected area Serebryany Bor and the Krylatskoye area.

It was put into operation in 2007 and got its name from the nearby street. In terms of popularity among filmmakers, the bridge has no equal among similar structures in the capital. It is equipped with noise-absorbing screens and stairways. The movement of cars takes place in 8 lanes, and the width of pedestrian sidewalks is 1.5 meters. The decoration of the crossing is a bright coral arch and a glass capsule at the top of its arch. Its height above the surface of the river is 30 meters, its width is slightly less than 40 meters, and its length reaches one and a half kilometers. The height of the arch is more than 100 m. The dimensions of the ellipsoid are also striking, the length of which is more than 30 m, the height is 13 m, and the width is about 25 m. Its weight is more than 1000 tons. This building is grandiose in every way. Until now, the fate of the ellipsoidal observation deck has not been finally decided. According to the original project, a restaurant was supposed to be located here. But for technical reasons, this idea had to be abandoned. After that, it was decided to open a registry office here.

After all, it would be so romantic to conclude sacred bonds not just anywhere, but right in the sky above Moscow! But so far this project has not been implemented.

The majestic bridge is one of the visiting cards of the city. It rises above the waters of the Moskva River, connecting the Kremlin and Sofiyskaya embankments. In the old days, in its place was a crossing of logs, which was risky to move along. The first stone structure here was built in 1687. During the time of Peter I, thieves gathered under it, and after dark, Muscovites tried not to walk in these places alone. The modern structure with a length of 487 meters was erected in 1938 with the participation of engineer N. Ya. Kalmykov. Its fence was decorated with images of the Soviet coat of arms of Moscow. 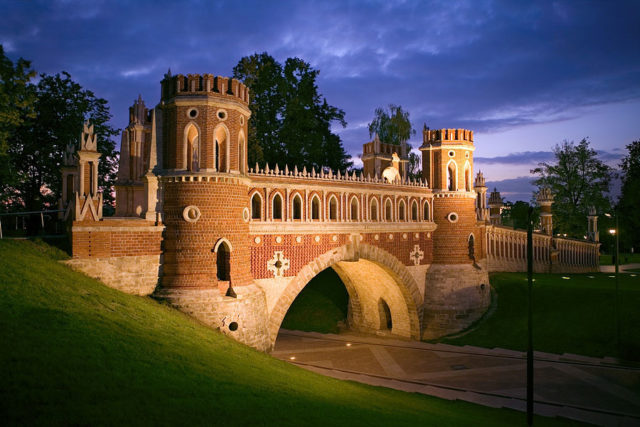 The construction of the Tsaritsyno residence near Moscow was entrusted by Catherine II to the architect V.I. Bazhenov. The empress was dissatisfied with the estate and never appeared here. The place gradually fell into disrepair. Restoration work was completed only in 2007. The attention of visitors to the palace and park ensemble is immediately attracted by the figured bridge, which was supposed to serve as the second main entrance. The combination of red brick and white stone, high towers with lancet openings, carved frames and pyramids give the building an exceptional look.
For a large number of sculptural elements, Vasily Bazhenov called his bridge “Figured”. It was he who laid the foundation for the construction of the legendary architectural monument – the Tsaritsyno estate.