Church of the Savior on Spilled Blood

This Church was built on the site where Emperor Alexander II was severely wounded and died in March 1881. The church was built from 1883 till 1907. The construction was funded by the imperial family.

Architecturally, the Cathedral differs from St. Petersburg’s other structures. The Church contains over 7500 square meters of mosaics—more than any other church in the world. The walls and ceilings inside the Church are completely covered in intricately detailed mosaics — the main pictures being biblical scenes or figures — but with very fine patterned borders setting off each picture. 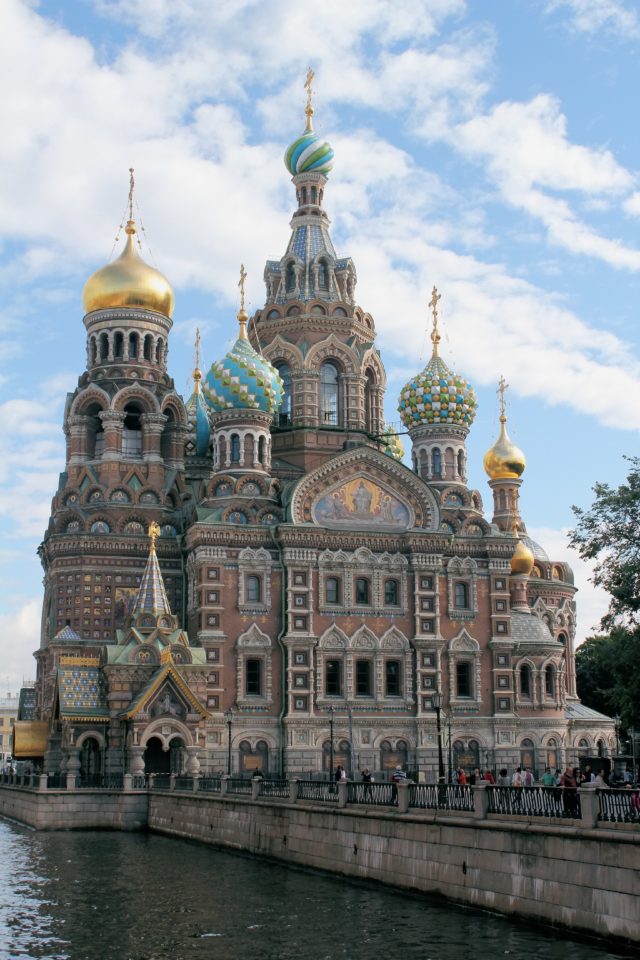 Saint Isaac’s Cathedral or Isaakievskiy Sobor in Saint Petersburg is the largest orthodox chuch and the fourth largest cathedral in the world. Climbing up the old winding staircase (562 steps) to the colonnade allows tourists to observe the amazing panorama of the city from the observation deck which is situated 43 meters high. 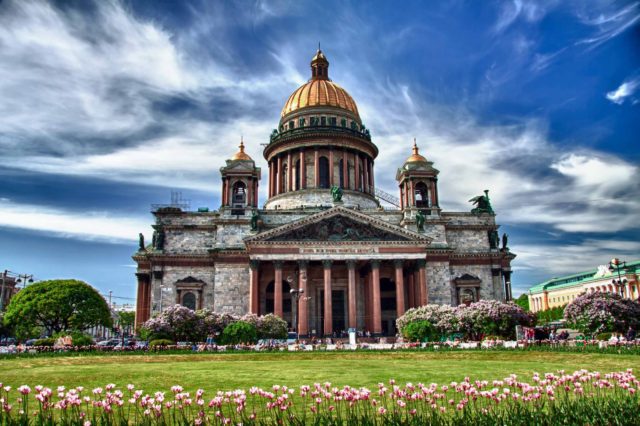 Cathedral of Our Lady of Kazan 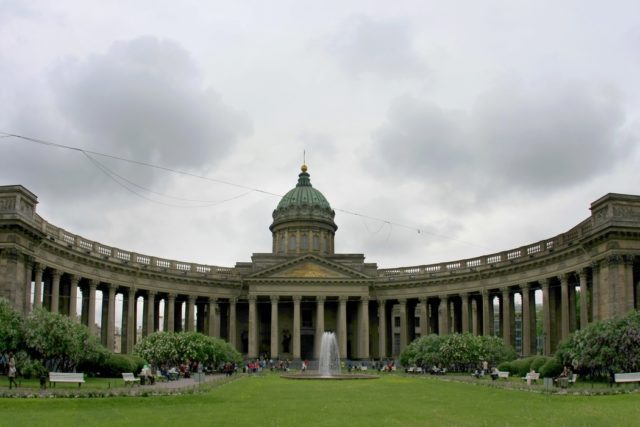 The Great Mosque of St. Petersburg is the biggest Mosque in the European part of Russia. The building was constructed in 1909-1920 by the architect Nikolai Vasilyev, also involving the engineer S. Krichinsky and the architect A. von Gauguin. Its construction in 1913 was dedicated to the tercentenary of the Romanov house. However, it took another seven years to finish the work on the interior decoration of the temple. The St. Petersburg Mosque is one of the largest in Europe – it can accommodate up to 5,000 people. The walls were made with grey granite and the dome and both minarets (tower) are covered with mosaic ceramics of sky-light-blue colour. 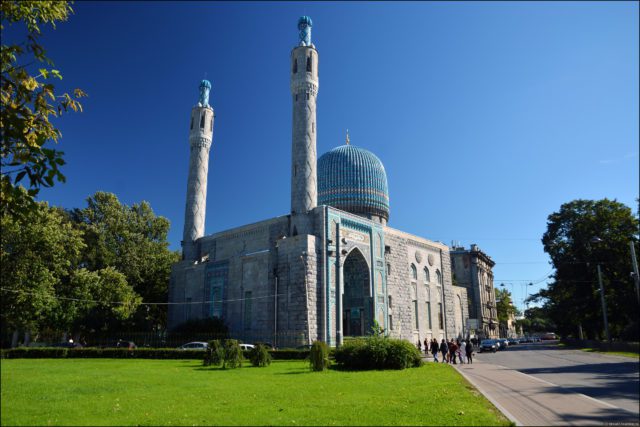 The world’s northernmost Buddhist temple. “Gunzechoinei” in Tibetan means “The Source of the Holy Teaching of All-caring Lord-Hermit.” This Buddhist temple was built in St. Petersburg in 1909-1915. The construction was initiated by the Buryat Lama Lobsang Aghvan Dorzhiev, the envoy of  XIII Dalai Lama. Funds for the construction were partly donated by Dorzhiyev and XIII Dalai Lama, and partly gathered among the religious in Buryatia and Kalmykia. In the datsan one can consult an astrologer and a Tibetan physician – a specialist in traditional Tibetan medicine. In the basement of the temple there is a cafe where you can try the Buryat cuisine.

The centre of public and religious life of Jews in Saint Petersburg (around 100 thousand people), one of the city’s oldest communities. The Grand Choral Synagogue is an architectural monument of federal significance; it is designed in the eastern, Moresque style. The building project was developed by the architects L. Bachmann and I. Shaposhnikov, also involving V. Stasov and N. Benois. The construction was completed in 1893. The St. Petersburg Synagogue is the second largest in Europe and the largest in Russia. The complex of the Grand Choral Synagogue includes The Great Synagogue, The Small Synagogue, mikvah (the ritual baths building, essential in Judaism) and The Synagogue of the Georgian Jews. The unique acoustics of the Great Choral Synagogue is known worldwide. You can conduct an experiment: try standing facing the wall at one end of the hall, then ask your friends to stay at the opposite side and whisper something quietly. Despite the impressive distance (10 meters), you will hear all the words perfectly. What is surprising – the voice is magnified in the center of the hall.

The Lutheran Church of Saint Peter and Saint Paul

Today it is one of the oldest and largest Lutheran churches in Russia. In 1938, after the nationalization, the church building was used as a warehouse for theatrical scenery, and as a swimming pool. In 1994 the church was returned to the believers. 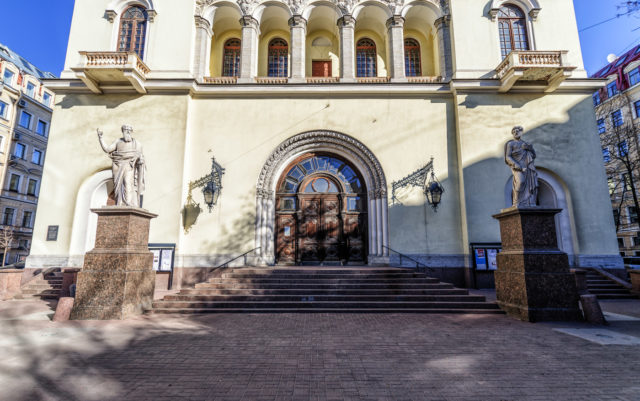 On December 12, 1705 Peter the Great signed a charter that would allow the construction of Catholic churches in Russia. The church itself (though not the building with which it is today associated) was founded in 1710. In 1738 Empress Anna granted permission for the church to erect a structure on Nevsky Prospekt, the main street of St. Petersburg. The project, however, met continued problems. The initial designs were based on work by Domenico Trezzini, the architect who designed the Peter and Paul Cathedral and was then deceased. His designs, however, were abandoned in 1751. In the 1760s, the French architect Jean-Baptiste Vallin de la Mothe drew designs for the church, but he returned to France in 1775 and it fell to the Italian architect Antonio Rinaldi to complete the church. On October 7, 1783, the church was completed. Because the Empress at the time was Catherine II of Russia (also known as Catherine the Great), the church was named after St. Catherine of Alexandria. 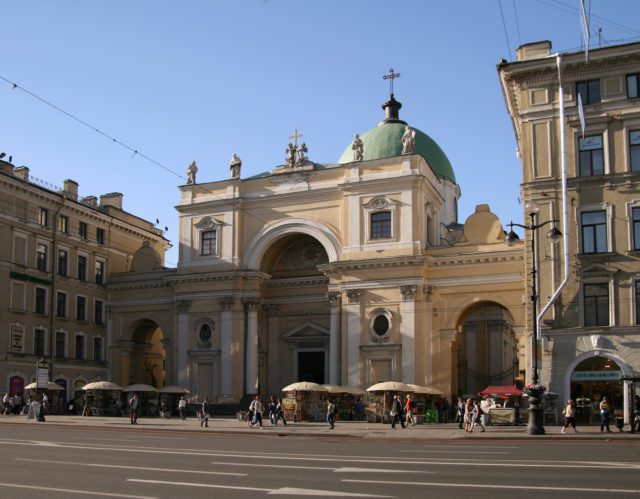 St. Nicholas Cathedral is one of the few churches in St. Petersburg that has never been closed, and from 1941 to 1999 it was a cathedral church. 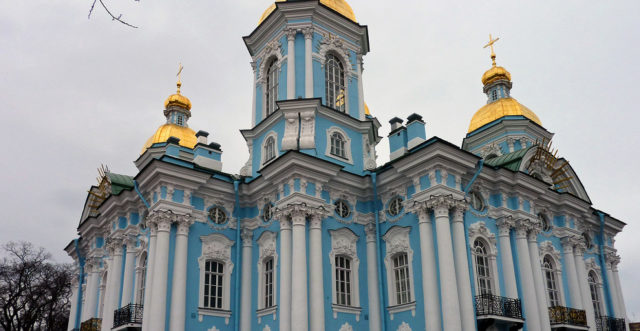