This cathedral church was founded in 1839 as a monument to the soldiers of the Russian army who fought and died in battles with the army of Napoleon. It was built on the collected funds for a long time – until 1883. During the Stalinist reconstruction of Moscow, the temple, which did not correspond to the communist ideals, was blown up, and in its place an open swimming pool “Moscow” was made. But after the fall of the Soviet Union, the state took upon itself the task of rebuilding the temple, which it was able to cope very quickly from 1994 to 1997. Then the temple was handed over to the Russian Orthodox Church and became operational. Inside the temple are luxurious interiors with painted walls depicting Russian princes and historical characters who fought for the unity of Russia and Orthodoxy. The temple was given the status of a courtyard of the Patriarch of Moscow and All Russia. 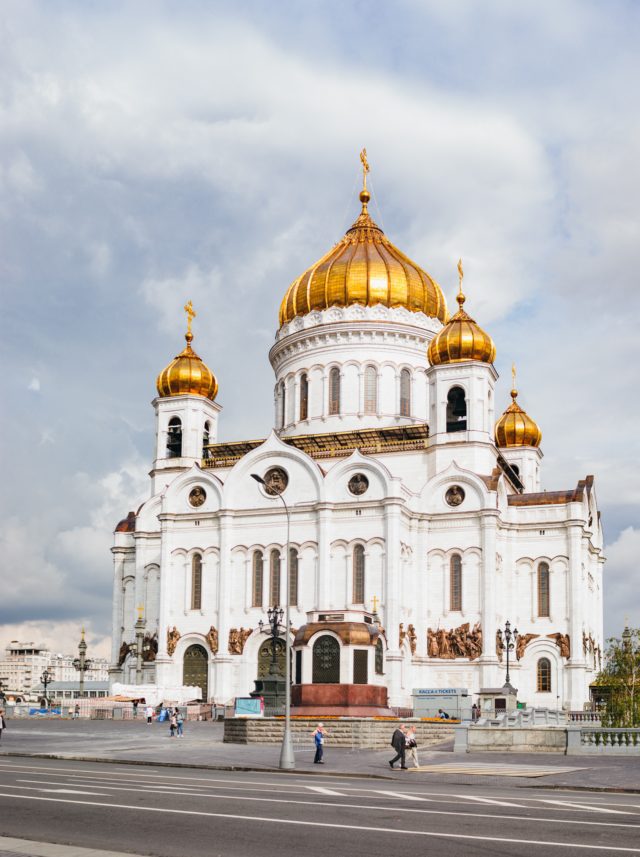 Cathedral of the Epiphany in Yelokhovo

The first mention of the newly built Yelokhovsky Cathedral is in a decree of 1694 issued by Patriarch Adrian. The first decades of this church was wooden, but later, by decree of Peter I, it was rebuilt from stone. The donation for the reconstruction was given by the princess Praskovya Ivanovna – the daughter of John V. In the Soviet period, the history of the temple was full of unrest and persecution, but in the 90s life in the Elokhovsky church returned to normal. Many Orthodox shrines are kept here: fragments of the hand of the Apostle Andrew the First-Called, cancer with pieces of wood from the cross on which Jesus was crucified, the relics of St. John Chrysostom, the icon of the Mother of God “Joy of All Who Sorrow” and others. 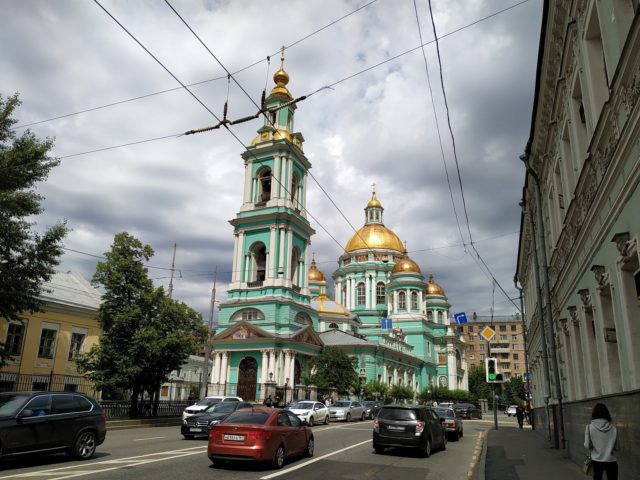 Peter and Paul Church in Yasenevo

The village of Yasenevo was first mentioned in the XIV century. According to sources, a number of wooden churches were located at the site of a modern temple at different times. Finally, in 1751, construction of a church in honor of the first apostles Peter and Paul began here. Construction ended in 2 years. Instead of nondescript wooden churches, now there stood a beautiful stone temple, near which there was a manor with well-kept parks and gardens, alleys and ponds. 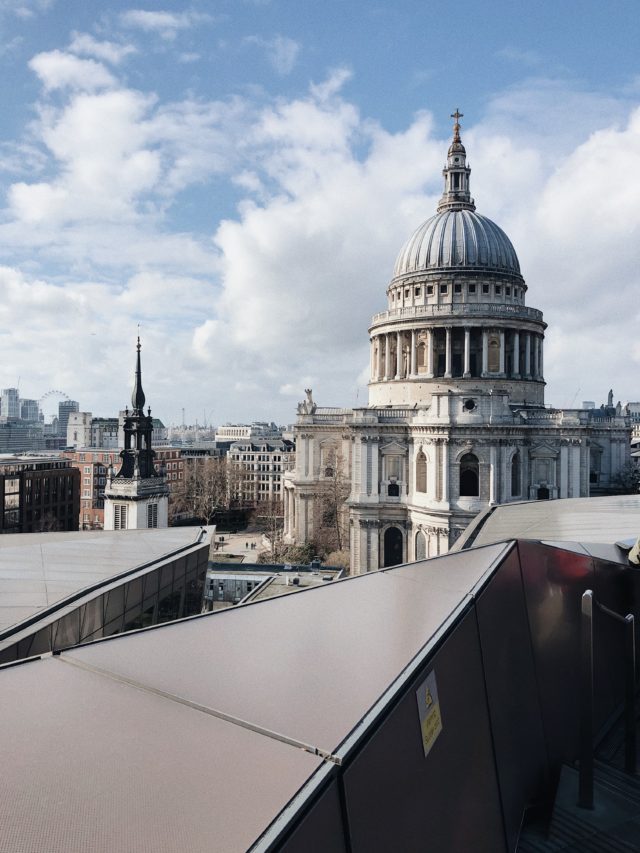 All Saints Church in Vsesvyatsky on the Falcon

The Georgian princess Darya Archilovna, who lived in Moscow in 1733, ordered to build a church dedicated to all the saints in her patrimony, a village near Moscow, in the All Saints. The construction was completed in 3 years, after which the church was consecrated. Half a century after this service here were conducted in Georgian, and at the church there was a graveyard for Georgian nobility. By the beginning of the XIX century an iconostasis appeared in the church. Now around the church is the Moscow district “Falcon”. 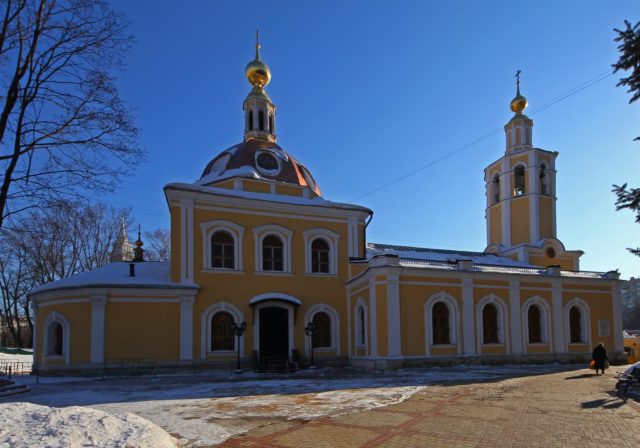 Church of Elijah the Prophet in Obydensky Lane

This wooden church – the “routine” appeared here in 1582 in one day, during a drought. Later, in 1702-1706, according to the project of I. Zarudny, a baroque building appeared, which has survived to the present day. The temple operated in the Soviet period, so it was able to preserve many shrines that fell into it for storage from other closed or destroyed temples and monasteries. Here you can see the miraculous icon of the Mother of God “Unexpected Joy”, the icon “Fiery Ascension of Elijah the Prophet”, a part of the belt of the Most Holy Mother of God. 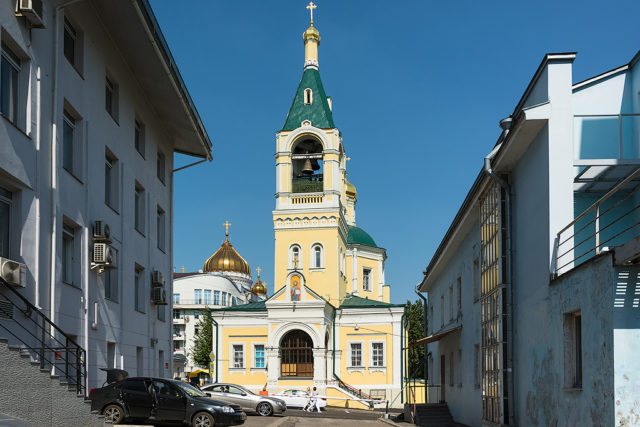 Church of the Intercession of the Holy Virgin in Yasenevo

The construction of this new temple began quite recently – in 2008, and in 2015, Patriarch Kirill consecrated the building of the new temple and served the divine liturgy there. The architecture of the temple building was borrowed from the XII century Byzantine temple architecture, and the inner space of the temple was also decorated according to Byzantine canons. Its walls are decorated with numerous mosaics that copy the best examples of the Byzantine school. The church has a basement floor, in the center of which is a baptismal font in honor of the Archangel Michael.

The first cathedral on this site appeared in 1625, after which it was repeatedly subjected to destruction and subsequent reconstructions, with each of which its appearance changed significantly. The last “reincarnation” of the cathedral took place in 1990. According to legend, the miraculous discovery of the icon of the Kazan Mother of God took place after a strong fire in 1579, which turned Kazan and its Kremlin into ruins. The archer, who started rebuilding his burnt house immediately, found an icon of the Mother of God under a layer of sand. Rumors about miraculous healings were soon spread all over the city, and the icon was believed to be the culprit. For a long time this icon served as the patroness and protector of Russian soldiers. During the war with Poland, the Russian army took copies of this icon, and when the war ended in victory, the soldiers promised to build a temple in the center of Moscow in honor of this icon.

Church of St. Nicholas in Khamovniki

In all of Moscow, this church is one of the most visited and beautiful Orthodox churches. The architecture of this 17th century monument is known far beyond the borders of Russia. Initially, the church of St. Nicholas was made of wood, and the first mention of it dates back to 1625. In 1657, it was replaced by a stone structure, and instead of a simple, strict style, a more elaborate, elegant one appeared – the so-called “wondrous pattern”. This style is widely used colored tiles, bright colors, a lot of decorative elements. The church building was built of brick, which was trimmed with white stone, and the facades are decorated with red and green tiles. Since the construction of the stone church has been repeatedly restored, however, the service in it at the same time did not stop – it was always open to believers. 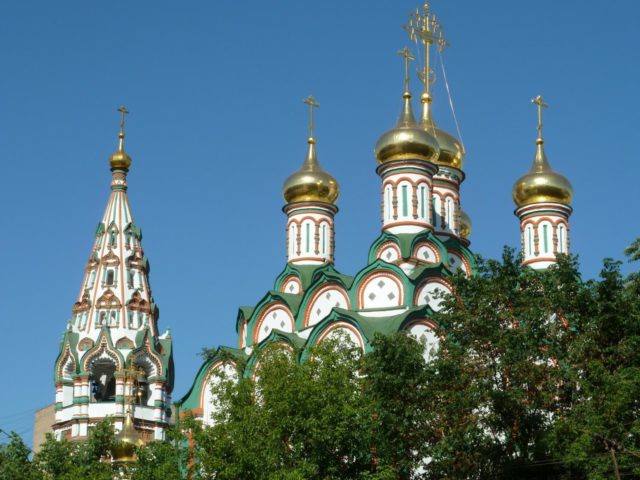 Church of St. Michael the Archangel in Troparyovo

Also, the church of Michael the Archangel was built in Troparyovo several times. The first, still wooden building, was absorbed by the fire. At the end of the 17th century, it was decided to erect a stone church in honor of Michael, which was built in 1694. Funds for the construction of the church gave the female Novodevichy monastery, since the village of Troparyovo belonged to his parish. The war with Napoleon, and later the destructive first decades of the Bolshevik rule, greatly disfigured the temple. However, in the years 1964-1970, Mosobrestoration specialists put a lot of effort into the restoration of the church, both outside and inside. The temple in Troparyovo is now considered a great shrine, since many relics highly prized by Christians are kept in it: the icons of the Mother of God “It is worthy to eat”, the “Inexhaustible Chalice”, the icon of St. Princess Anna Kashinskaya, Great Martyr George, St. Nicholas, the Blessed Moscow Matron. 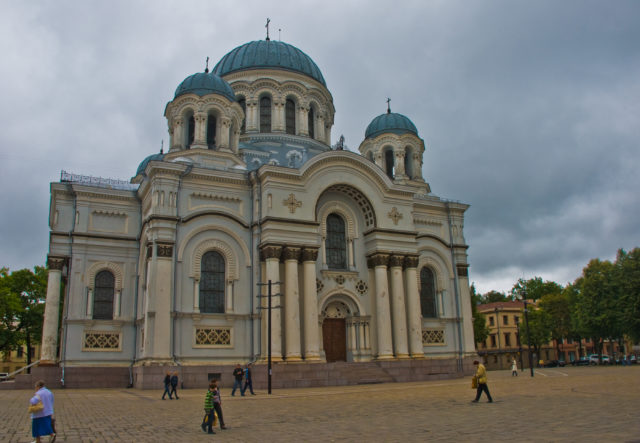 Church of John the Warrior on Yakimanka

This church appeared in 1704-1713 during the reign of Peter I. The Church of John the Warrior is an excellent example of Russian Baroque, it has been standing on Bolshaya Yakimanka for more than three centuries. The layout of the building is traditionally Russian (supposedly it was drawn by the emperor himself), using the principle of “octagon on a quadrangle”. The building has an unexpectedly bright facade, decorated with yellow, green and red mosaics. Throughout its long history, this church has never stopped working, even in the harsh for it 20-30 years of the last century. Believers especially honor this temple for the fact that there are many especially revered relics in it: an icon and a piece of relics with a ring from the Great Martyr Barbara, an icon of the Vladimir Mother of God, other icons and arks containing ashes of over 150 saints. 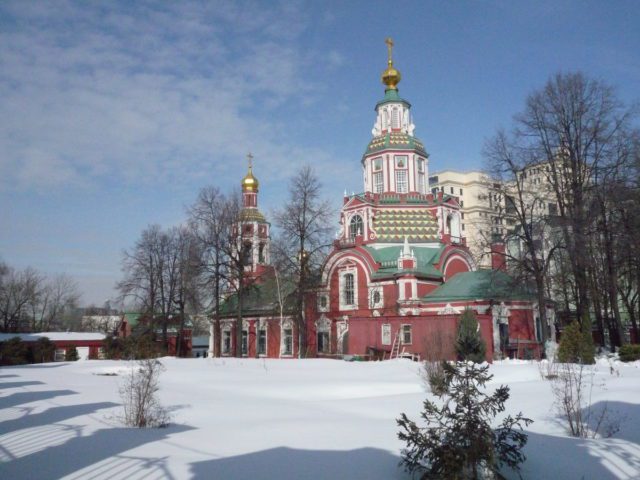