Restaurant of traditional Russian cuisine on Zvenigorodskoye Highway. The institution got its name in honor of the epic Russian hero. Three rooms are decorated in the style of the old boyars’ chambers, the walls are richly decorated with paintings and paintings with scenes of Russian epics and fairy tales. The menu contains dishes from authentic recipes: quails baked in oven and whitefish, deer roast in a pot, and a variety of cereals. More modern European positions have been assigned names appropriate to the occasion, for example, there is the Bogatyrsky burger or the Boyarsky feast steak. In the drinks section you can select self-made tinctures. And in “Dobrynya” they can organize a tea table for a company with a samovar, dryers, pies and pancakes with various fillings.
Address: sh. Zvenigorodskoe 4 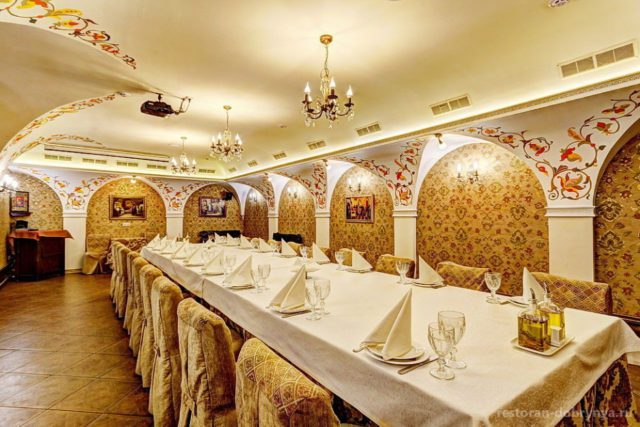 Rossich is a great place for those who want to relax after a hard day’s work and sit with friends, colleagues or loved ones in a comfortable home environment. The restaurant with Russian national color has several halls, and each of them is decorated in its own way, however, all the interiors are inspired by Russian culture: merchant estates and noble family estates, about which we all know so much from classic novels and literature lessons. So, one of the halls is completely decorated with wood in green colors and might like Mr. Oblomov, while the other hall, remotely resembling a terrace, is made of brick brought from the old estate of Tver, where the local representative of the merchant class lived. A small stone hall “Grot” has to conduct business lunches and family celebrations.
This idyllic atmosphere of a departed national paradise is supported by the menu. It contains a lot of authentic Russian dishes, in which the cooking technology has only partially changed. There are pike caviar, and homemade bacon with garlic, Russian pickles, and a real rich ear, and the right soup with donuts, and much more. And most importantly, here you can taste game dishes: everyone who dreamed of trying beaver meatballs, dumplings with bear meat or venison fillet, be sure to go to Rossich. Banquet tables are “bursting” under the weight of a piglet baked to the ruddy crust, goose in honey sauce, duck, turkey, sterlet in steams of wine with herbs, calf legs marinated in cognac, and other dishes of Russian cuisine. By the way, appetizers and desserts in the restaurant are also special: the regulars assure that such delicious pies with piping hot, as here in Moscow, are nowhere to be found, and cakes, pastries and ice cream are always fresh, their own, homemade.
Excellent cuisine and thoughtful cozy interior make many visitors come back here again and again. Rossich has continued to pleasantly surprise for more than 10 years, and no one has ever left this disappointed.
Address: st. Nezhinskaya 9, Bldg. One 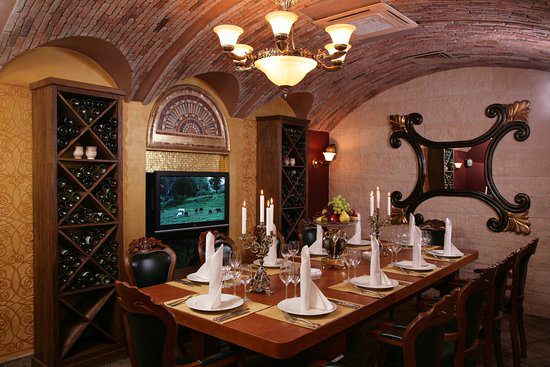 Russian restaurant in two steps from the Spasskaya Tower. The institution is located in a historic building, where the first in Moscow stalls and a pub were once located. There are four thematic halls in Spassky. The “Kremlin” with antique furniture, a working fireplace and stucco styled as one of the Kremlin offices. The “Triumphal” reminds the malachite drawing room of the Hermitage, and the “Tretyakovsky” exhibition hall of the Tretyakov Gallery. In the “Crimean” hall set a map of the Russian Federation of wood and equipped with large wine racks. The menu is based on classic Russian cuisine. The chef emphasized the long-forgotten recipes and technologies. For example, roots, needles and mushrooms are added to sauces and broths. Cocktails in Russian style have become the key feature of the bar card. The mixes are based on whiskey infused on buckwheat, or Cahors infused on Borodino bread.
Address: st. Ilyinka 3/8 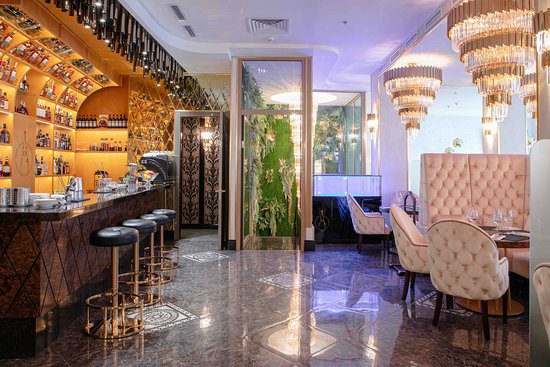 Restaurant complex, designed by Arkady Novikov, with Russian cuisine in an old mansion. In the three-storey mansion of the merchant Gusyatnikov nine magnificent halls were recreated. There are Big Front and Fireplace Halls, a billiard bar, a Moorish-style cigar room, a respectable karaoke room and a mini-hotel. A small parquet room with a separate entrance is popular with famous guests. All three floors are decorated with “aged” mirrors, designer chandeliers with gold leaf, furniture in the style of the XIX century and in some places restored antique parquet. All this is in harmony with the Russian merchant cuisine on the menu, where there is a mix of northern fish, rabbit pate on pumpkin marmalade, sterlet with caviar sauce, branded goose fillet cutlets, branded bird cherry cake, and a traditional samovar with gingerbread and baranki. According to the concept they entertain – there is their own gypsy ensemble, romances under the piano, sometimes jazz and blues. For family guests a kids club is open.
Address: st. Alexandra Solzhenitsyn 2a 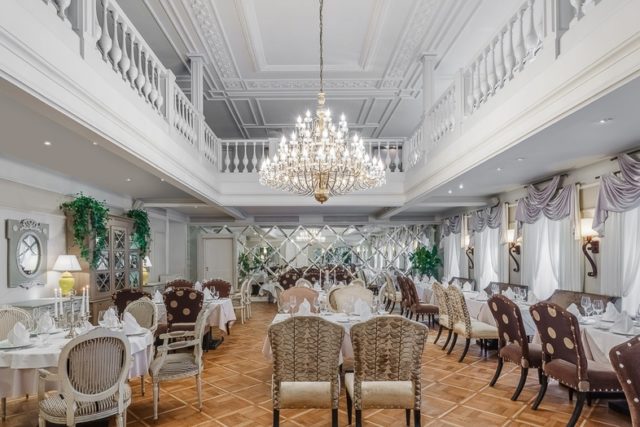 Nostalgic Russian Restaurant by Ginza Project. Cheesecakes, borscht, Olivier and mashed potatoes with chops – the tastes of Soviet childhood plus several types of homemade tinctures were so in demand that “Mari Vann” is even in three cities in the United States and London. Chip places – stylization of an apartment, where there is a “master” and pets: a cat, a canary and a fish. For the rest, checkered curtains, wallpaper in flowers and home floor lamps – as if you are a guest.
Address: per. Spiridonevsky 10a 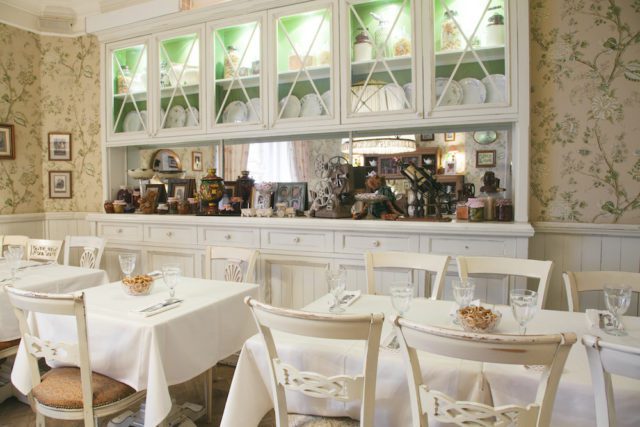 Restaurant of Russian cuisine on the banks of the Moscow River in the Lower Mnevniki. Outside, “Ermak” resembles an old manor-tower with carved shutters. Inside – vaulted ceilings are decorated with patterns, the hall is decorated with old spinning wheel and cast iron. The restaurant’s menu contains Russian specialties: homemade ravioli, lard, pancakes, pies. In the game, elk, deer, roe deer and duck. In the company to offer food homemade liqueurs and tinctures. Every Saturday, a folklore ensemble performs in the restaurant. Periodically, children’s entertainment shows with the participation of clowns.
Address: st. Lower Mnevniki 41 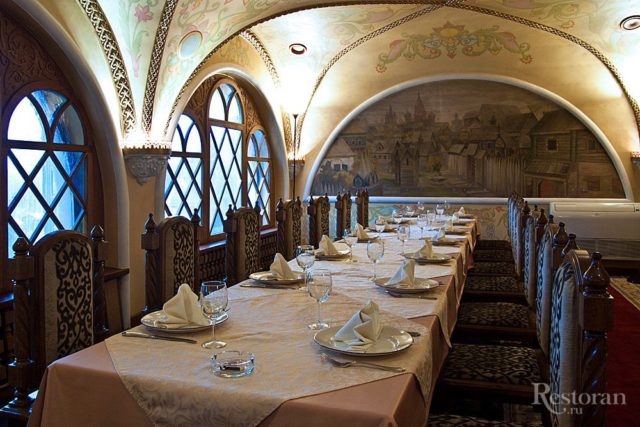 Restaurant of the Central House of Writers

The restaurant of the Central House of Writers on Povarskaya Street is a place where you can comfortably spend time in stunning historical interiors. The institution is located in a mansion, a landmark for Russian culture, where Mikhail Sholokhov, Konstantin Simonov, Mikhail Zoshchenko and other writers and poets performed. The Central House of Journalists and today is the point of attraction for intellectuals and artists.
In total, our restaurant has four rooms: Oak – a ceremonial two-level hall with stained glass windows and a massive crystal chandelier, a fireplace with the existing 19th-century fireplaces, the Cabinet of the Count, which today is used as a kind of VIP-room for 12 people, and Motley. The halls preserve historic interiors and antique furniture of the XIX and XX centuries: carved chairs, antique buffets and decorative elements.
The TsDL restaurant is a great place for holding luxury banquets, elegant weddings, large-scale corporate events and other events. The holiday, organized at the highest level within the walls of the grand mansion, will be remembered by each guest not only as a gastronomic but also as a cultural event!
Address: st. Cook 50/53 p.1 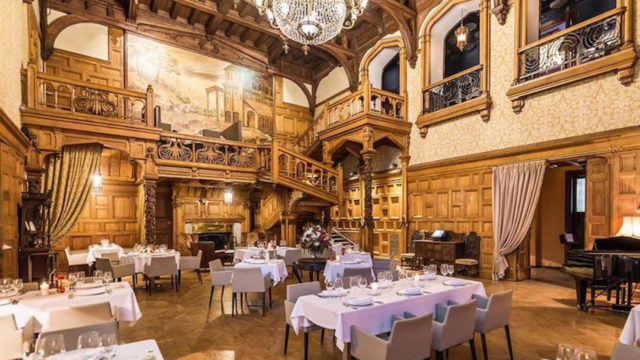 Restaurant at the hotel complex “Vega”. Spacious, for 250 guests, the hall is elegantly decorated in a modern European style; the space is divided into several zones located at different levels. The menu is adjacent to Mediterranean and Russian cuisine; There is also a section of grilled dishes. In the extensive bar list – a good selection of wines and cocktails. In the evenings, live music is played in the Geese-Swans restaurant.
Address: w. Izmailovo 71k3V 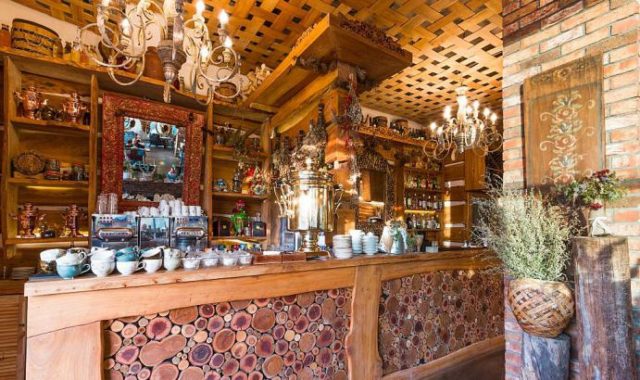 Artistic Siberian restaurant. The Moscow Suitcase was opened by Oleg Menshikov, but now he has moved away from managing the project. The ultramodern building from the outside inside repeats the interiors of the beginning of the 20th century: old lamps, photographs, antique clocks, books and desk lamps. Curiosity is “nominal tables” of modern actors: Konstantin Khabensky, Mikhail Efremov and others. The menu is made up of “dishes of the Yenisei province of the nineteenth century”: smoked Baikal omul, muksun, nelma, taimen, as well as meat – sahatina, wild boar, game. The bar menu is geographically wider. There are collectible wines and wines by the glass, whiskey, vermouth and old tinctures on spices: erofeichi, ratafia, vodka, brandy. Often organize musical performances and creative evenings.
Address: Gogol’s Boulevard 25 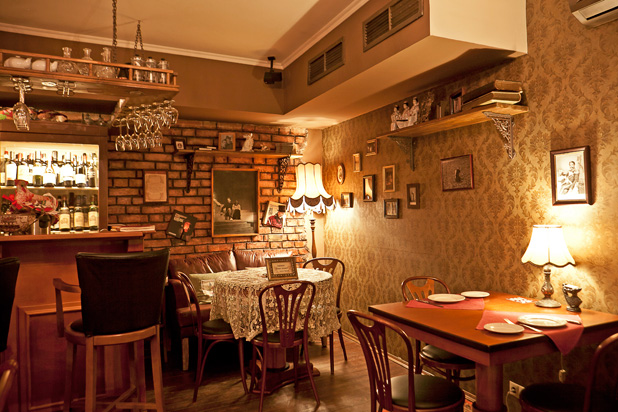