The fountain is unique in that instead of the traditional three colors, five are used in its lighting. Jet streams of water, spiraling and mixing, are capable of creating thirteen pictures that change every five minutes.
Work time: daily
Address: st. Michurina, 230 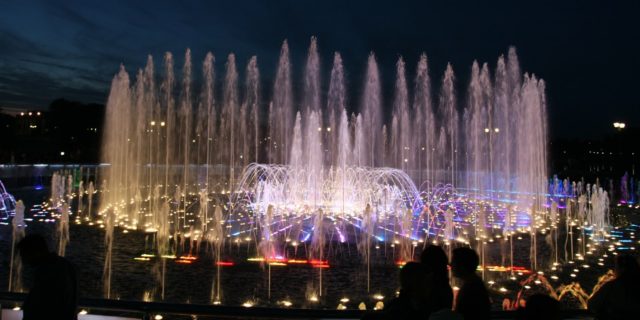 Tavatuy is a lake in the Sverdlovsk region, which is located on the eastern slopes of the Ural Mountains, 50 kilometers from Yekaterinburg. Translated literally from the Komi-Permian dialect “ta va tuy” means “this waterway”.
Today Tavatuy is one of the most beautiful lakes in the Urals and a favorite vacation spot for citizens. On its shore are the villages of Kalinovo, Tavatuy, Priozerny (old. Shamanika), as well as many children’s health camps and recreation centers. On the shores of the lake, many Ural poets, writers and artists drew inspiration. For example, the story “Krutenka Gorka” by Levian Chumichev, the author of “Tavatuysky Bylits”, is recognized as one of the forty-five best works of Russian literature of the 20th century.
Address: Sverdlovsk Region, Lake Tavatuy 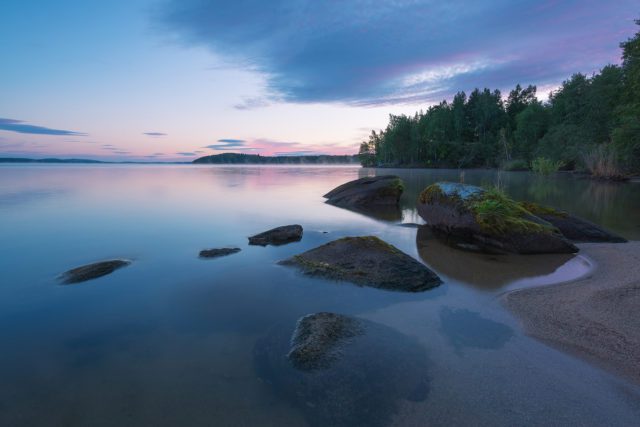 In one place, just a couple of square meters, there are several literary museums, a theater and a printing house, as well as monuments, green spaces and benches. This quarter fully reproduces the city of the early 19th century. Here you can meet modern poets who are inspired by the energy of the geniuses of the century before last. The park hosts chamber music concerts, exhibitions and poetry evenings. Walking here, you can look into the existing forge, stable, carriage shed, museum of books and dolls, five literary museums, a well-groomed square with ancient lanterns and figured grates, as well as a chamber theater, a summer stage and gazebos located in the square.
Opening hours: daily, 10: 00–20: 00
Address: st. Pervomayskaya – st. Proletarian 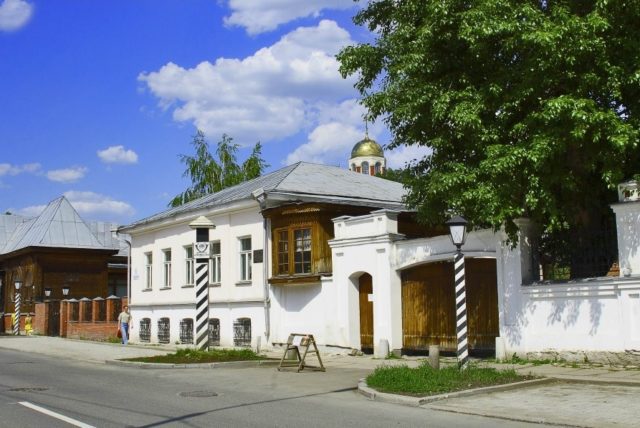 On the Ural “Star Square” laid stars with the names of honored artists. Here, of course, you will not find Hollywood celebrities: the authors of the project sought to perpetuate primarily the Urals.
Address: st. March 8, building 15 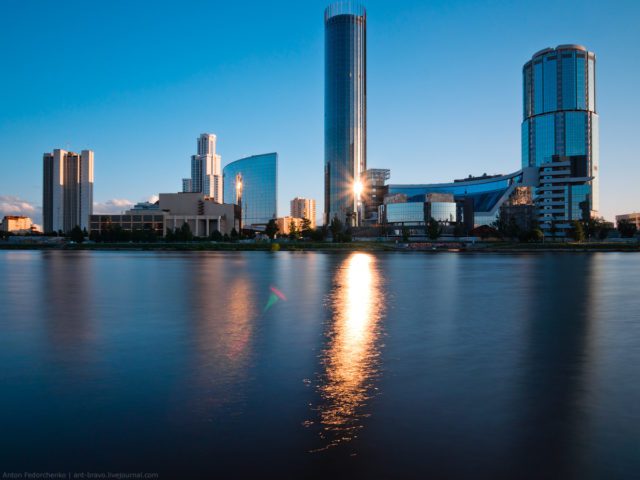 House of the Blacksmith Kirillov

The building is located near Yekaterinburg, in the small village of Kunara. The author of folk architecture is a simple smith Sergey Ivanovich Kirillov. Over the creation of his home, he worked tirelessly for more than 15 years. Patterned murals and traditional ornaments cover not only the house itself, but also the external fence, as well as the adjacent buildings. In the design of the house there is Orthodox symbolism, flowers, words from a song from the times of the USSR “Let there always be sunshine” and stars of the country of the Soviets. After the death of the blacksmith, the house began to decay. Paint was peeling on its facade, and a pioneer was knocked down from the roof during the wind. The 78-year-old mistress of the house (the widow of the blacksmith) Lidia Kharitonovna herself is no longer able to restore the house. And tourists could only take pictures and admire the skillful work. But at some point, the situation changed dramatically. They learned about the house in the Yekaterinburg Museum of the Nevyansk Icon. Thanks to their efforts, the building was repaired, and the pioneer was returned to its original place. Today, tourists from all over the world come to see the Kirillov House, many tour agencies offer to visit this miracle of naive architecture.
Address: Sverdlovsk Region, Kunara Village 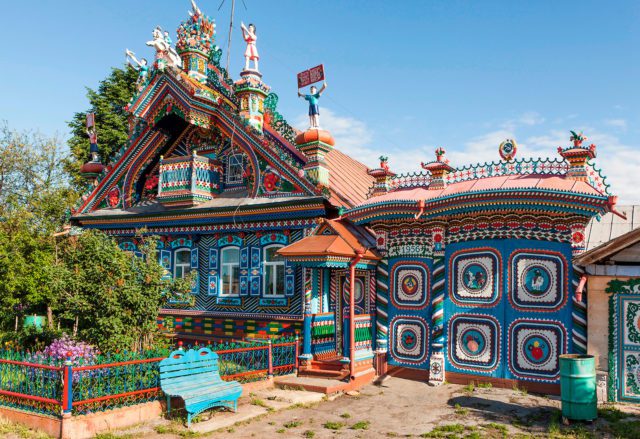 Yekaterinburg is considered one of the greenest cities in the Urals and its neighboring regions. In the eastern part of the city is a picturesque object – “Stone Tents”. This is the exit to the surface of rocks, fancifully modified by water and wind over the millions of years of the existence of the Ural Mountains. Around the “Stone Tents” is located the Shartash Forest Park with an area of ​​777 hectares, named after the lake around which it is located. The fact that such a strikingly beautiful corner of nature is located within the city is a matter of pride for the people of Yekaterinburg. Lake Shartash is a favorite vacation spot of Yekaterinburg residents, especially in the warm season. On the territory of the forest park in different directions scattered paths along which lovers of outdoor activities walk, cyclists laid their routes. In winter, there is expanse for skiing. The visiting card of the Shartash Forest Park is the portal to the entrance to the green zone. It consists of two stone hemispheres with a passage between them. Here tourists like to be photographed.
Address: Yekaterinburg, Kirovsky District 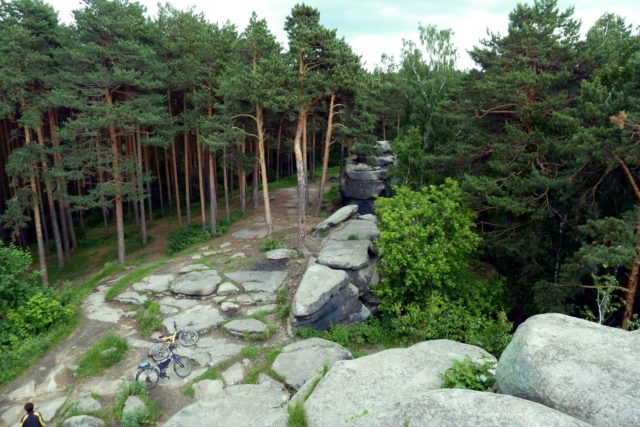 Meteogorka is located on the left bank of Iset, and this is a great option for the first meeting with Yekaterinburg. In 2014, the Clean City program was held here, after which graffiti appeared on the walls – works of modern art from local artists. Since 1836, the meteorology station and the city observatory have been on the meteorological station. At the weather station, in addition to monitoring weather changes, work is underway to study the regime of rivers, as well as actinometric and aerological studies in the city and its environs.
Hours: daily, around the clock
Address: Yekaterinburg, st. People’s Will, d. 64

Monument to the Invisible Man

Perpetuate the Invisible Man in Yekaterinburg decided six years ago, in 1999. The writer, and now the deputy of the City Duma, Yevgeny Kasimov, did this almost in a dispute. Footprints of different sizes are visible on the bronze plate. The prints belong to the authors of the project – Yevgeny Kasimov himself and the artist Alexander Shaburov. The authors of the idea, perpetuating their feet, argue that their work tells not so much about the literary hero Herbert Wells, but about the tragedy of loneliness. This monument is about a world where people communicate without seeing each other. According to the project sponsor Nadezhda Tsypina, director of the Belinsky Regional Scientific Library, on the lawn of which there is a stove: “There is less and less material left in our life. We are much less likely to meet friends. We read real books much less often, practically do not write real, good letters. And this monument, like never before, reflects the essence of our time. ” The monument was completed in just one week. In summer, he hides in the grass, and in winter under the snow, thereby repeating the fate of his invisible hero.
Address: Yekaterinburg, st. Belinsky, d. 15 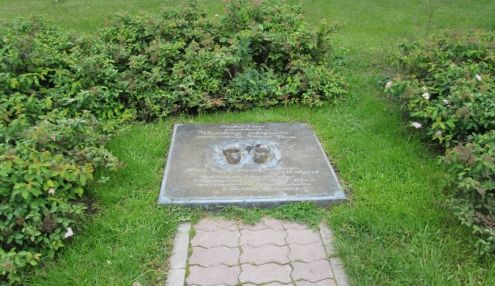 The fountain’s pool, which has a perfect round shape, is lined with marble of a noble pink hue. The pedestal on which the sculptural composition rests is made on one of the stone Siberian quarries. Cast iron flower, which is the basis of the composition, was specially cast by the masters of Kamensk-Uralsky. Its petals are painted green. In the center of the flower, golden ears of wheat are earning, and at the very top is the core of the fountain sculpture, from which a tough stream of water beats, rising up several meters. The fountain is located opposite the administrative building, which used to be the regional committee of the CPSU, and this could not but bring a certain political coloring. Each large petal of the flower is decorated with alternating Soviet pentagonal stars and crossed sickle and hammer, which are a symbol of the unity of the working and peasant classes.
Address: Yekaterinburg, Labor Square 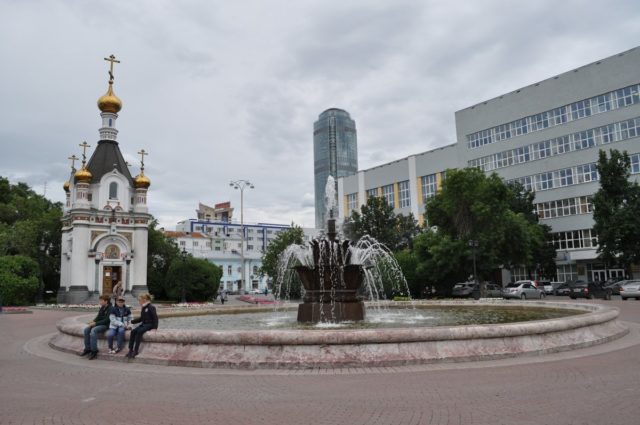 Monument to the Plumber Athos

The authors of the sculpture decided to draw the attention of ordinary people to the difficult life of plumbers. Next to the plumber on the manhole cover was originally an adjustable wrench, which eventually disappeared. In addition, attentive passers-by immediately noticed a portrait resemblance of everyone who loved Afoni to the hero of the film “Belorussky Station” Ivan Prikhodko, played by the legendary Evgeny Leonov. It is worth noting that Afonya became one of the most noticeable and beloved characters of the city of Yekaterinburg. Caring residents from time to time put a bottle of vodka in his hand – for work for the good of the city, of course.
Address: st. Siberian tract, d. 2/25

Its fall took place in the framework of the project “Museum Night”. The townspeople witnessed the fall of the meteorite and received a unique opportunity to scan its pieces using a device specially designed for this purpose. After a scientific study of the crater, the crash site was mothballed. And later turned into an art object called the Golden Crater.
Address: st. Dobrolyubova, d.19a

Initially, the building was erected for the family of the mine surveyor I. Polkov, however, the mansion changed its owners several times, and it entered the history of the Urals as the House of Sevastyanov. In 1917, the revolutionary soldiers of the infantry regiment defeated everything that came to hand in the mansion. And a year later the Ural Commissariat of Labor was housed in the building; since then, for decades, the regional council of trade unions has been here. The inscription “House of Unions” hung on the facade of the rotunda, and the words “Glory to the working class” crowned the roof of the former mansion. The trade union organization was in the building until its restoration. As a result of restoration, the building was transformed not only outside but also inside, where expensive chandeliers, curtains and wooden furniture with carved elements hang in the middle of the decoration. The walls of the mansion are decorated with gilded bas-reliefs, ornament on the ceiling, and expensive parquet on the floor. The opening of the renovated building took place in the spring of 2009. Today in the house of Sevastyanov is a government residence, he was given the status of an architectural monument of federal significance.
Address: Yekaterinburg, pr. Lenin, d. 35 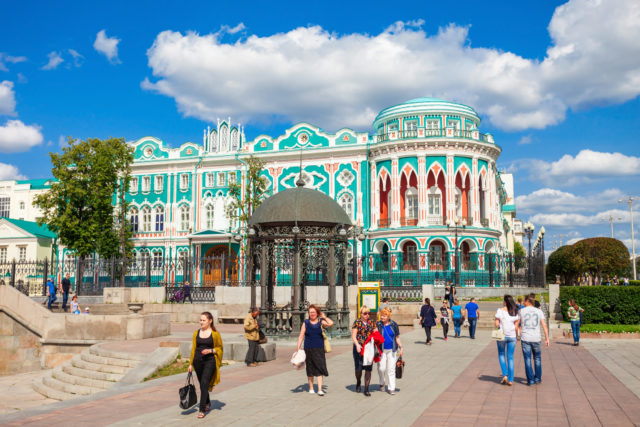 The garden exposition includes more than 50 stone formations from around the world. Each exhibit has a certificate and certain dimensions – at least one meter in length or width. The stones are placed on specially prepared sites in random order. The first exhibit was brought from Italy – serpentinite weighing more than four tons. In addition, stones from Mongolia, Uzbekistan, China, Kazakhstan, Denmark and Hungary are installed in the garden. At the grand opening of the garden in 2010 was attended by Ural geologists, the city administration and foreign consuls.
Address: Moscow highway, 17 km 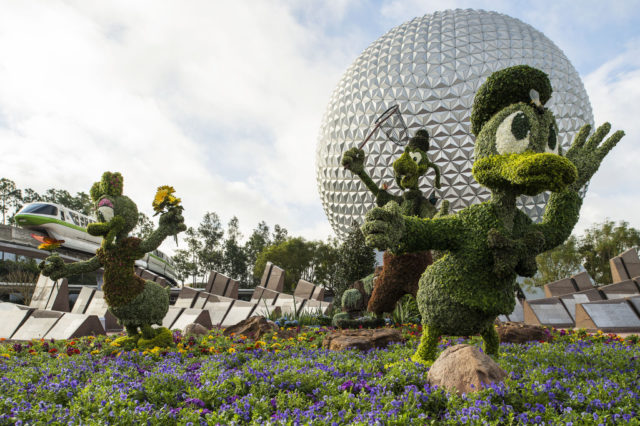 The historical square acquired its modern look only on the eve of the 250th anniversary of the city, in 1973. It was then that the grand opening of the museum and memorial complex took place, in the preparation of which the most famous architects of the Soviet Union took part, such as N. S. Alferov, V. A. Piskunov, L. P. Vinokurova, G. I. Dubrovin, A. E. Korotkovsky, A.V. Ovechkin. The total area of ​​the square is eight hectares, on which the Yekaterinburg Museum of Fine Arts and the Museum of Blacksmithing are located, as well as here you can see local attractions – “Stone Garden”, a city dam, an old water tower.
Address: Yekaterinburg, st. M. Gorky, house 4a 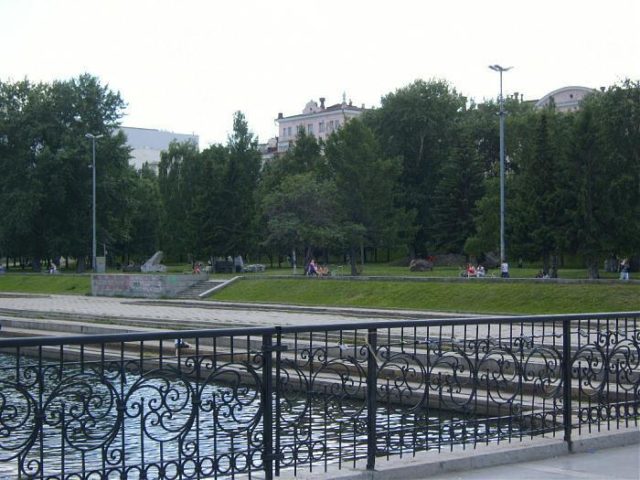 House of the Merchant Zheleznov

The merchant of the second guild, the gold miner and philanthropist Alexei Zheleznov acquired the estate in 1905. It was simply impossible not to fall in love with an unusual red brick building, folded in the mood of the Russian tower, with a beautiful garden in which a marvelous marble fountain was located! The philanthropist settled here with his wife Maria and four children, but the serene family happiness did not last long: in 1914, the wife suddenly dies, and heartbroken Alex decides to never marry again. However, the troubles of the Zheleznov family did not end there: during the civil war, the merchant, together with the children, joins the White Army and leaves for Siberia, after which their traces are lost in Tomsk … Despite the absence of owners, the city authorities did not forget about the house of the merchant Zheleznov. After the October Revolution, anarchist’s apartment was located in its walls, then a boarding school was organized for disabled children, and during the Great Patriotic War, the P.K. Sternberg Astronomical Institute transported from Moscow was located here.
Address: st. Roses Luxembourg, d. 56.