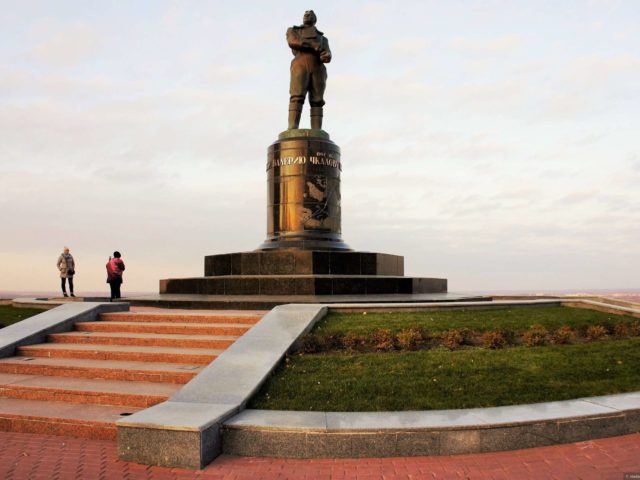 The Chkalov staircase is an interesting cultural object of Nizhny Novgorod. Beginning with the magnificent figure eight from the monument to Valery Chkalov, she walks down the carpet to the river where the Hero boat stands. The convenient location and unusual shape of the stairs make it one of the main attractions of the city, although it was built not so long ago – in the middle of the 20th century.
Address: Russia, Nizhny Novgorod, Alexander Garden 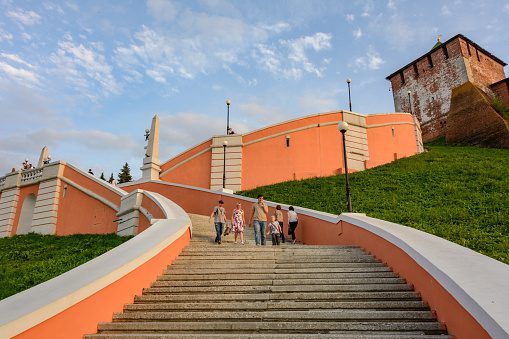 Walking along the intricate curves of the slope, then climbing the stairs, then going down the old asphalt, one cannot but experience the aesthetic pleasure of contemplating the views of the city that open from the high bank of the Volga. This is the embankment of Fedorovsky, one of the wonderful walking areas of Nizhny Novgorod.
Address: Fedorovsky Embankment, Nizhny Novgorod, Russia 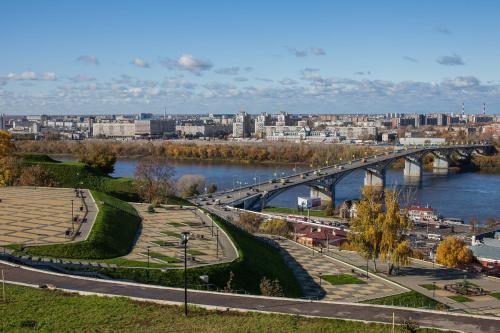 The main fair house is the little that has been preserved from the once huge and noisy Nizhny Novgorod fair. A few years ago, modern pavilions stood in front of its facade, against which the scope and richness of the decoration of this magnificent building were lost. Numerous shops inside hid the interiors of the passage. On November 4, 2017, after restoration, the Main House of the Nizhny Novgorod Fair appeared in an updated form. A multimedia park “Russia – My History” has opened within its walls.
Address: Sovnarkomovskaya St., 13, Nizhny Novgorod

House of Peter I

The oldest monument of urban civil architecture was erected in the XVII century. There is a historical legend that it was here that Tsar Peter I stopped when he first visited the city on the Volga. Thanks to the two-story white-stone house, we can understand how the rich merchant housing in Nizhny Novgorod Posad looked like.
Address: Pochainskaya St., 27, Nizhny Novgorod 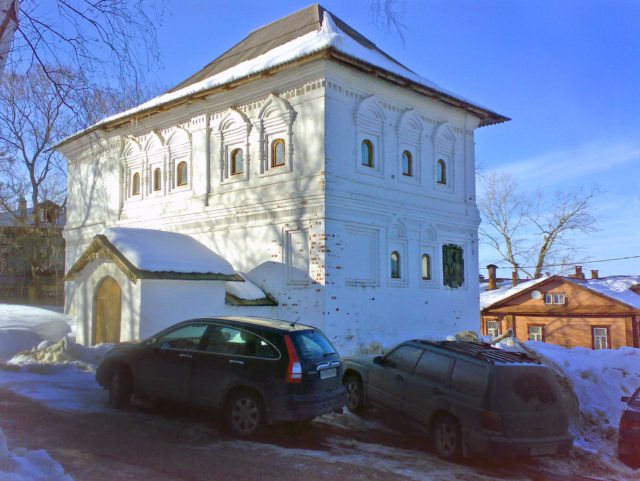 The Nizhny Novgorod branch of the State Bank is one of the few buildings in the country that have never changed their functions and architectural appearance. The construction combines the features of Romanesque architecture and Russian architecture of the 17th century, thereby expressing the idea of the greatness of Imperial Russia, its inviolability and fidelity to patriarchal traditions.
Address: Bolshaya Pokrovskaya St., 26, Nizhny Novgorod 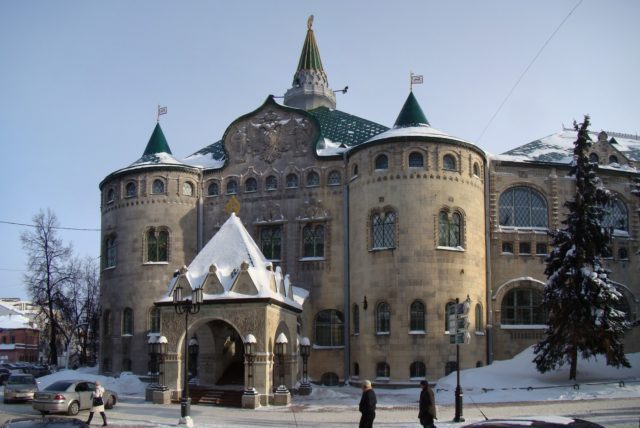 An amazing atmosphere of creativity will give the production itself. You can personally witness the “birth” of Khokhloma products, the stages of its manufacture. Live to see how the hands of artists work, to smell the wood and colors, to feel the magical effect of bygone eras and generations inherited by the masters and be amazed at new, modern works.
Opening hours: Mon-Fri 8: 00-17: 00, break 12: 00-13: 00
Address: st. Chkalova, 18, Semenov

If you are in Nizhny Novgorod, then a must-see item on the program should be a walk along Bolshaya Pokrovskaya Street, Pokrovka Street, where magnificent buildings have been preserved. The pedestrian street, there are many interesting buildings, sculptures, cozy cafes, boutiques. A Muscovite unwittingly compares Pokrovka to Arbat, and an American, possibly, to Broadway.
Address: Bolshaya Pokrovskaya street, Nizhny Novgorod 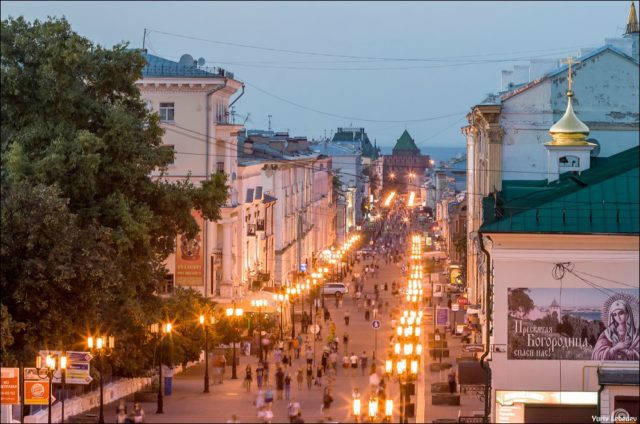 Monument to Minin and Pozharsky

National Unity Square is located immediately upon leaving the Kremlin through the Ivanovo Tower. This square is a landmark not only of the city, but one can say that of the whole of Russia.
Its two main objects are interconnected by one event, namely the deliverance of our country from the Polish invaders in the Time of Troubles, more precisely in 1612.
At the beginning of the 17th century, most of the Russian cities, including Moscow, were occupied by foreigners. Residents of Nizhny Novgorod, not captured by the Poles, led the liberation struggle, and they were inspired by the call of the Zemstvo elder K. Minin, which sounded here. The Square of People’s Unity Skoba (the former name of the square) began to be called only in December 2005. And in the distant 16th century, this Posad Square was called the Lower Market (Posad). By the way, the market existed here almost until the 20th century. Posad markets were usually organized at the entrance gates of the city. In Nizhny Novgorod there were two such markets. at the Ivanovo Gate – Lower Posadsky, and at the Dmitrievsky Gate – Verkhnyaya Posadsky.
Address: National Unity Square, Nizhny Novgorod. 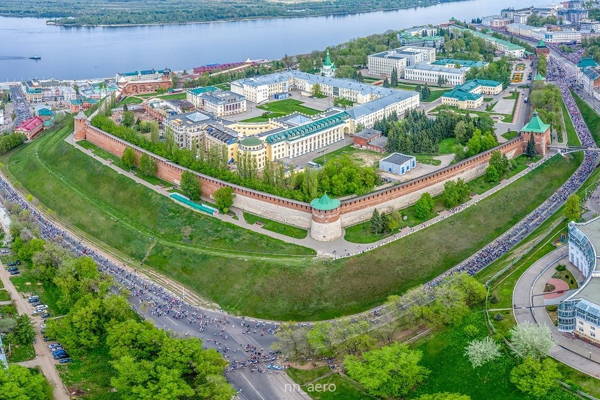 The monument to the famous pilot Valery Chkalov is considered the second most popular attraction in Nizhny Novgorod after the Kremlin. Wedding processions come here, appoint dates here, and tourists consider it a matter of honor to take a picture next to him and take a walk along the huge Chkalov stairs. Valery Petrovich Chkalov – Soviet test pilot, participant in an unprecedented flight through the North Pole. As a teenager, he first saw a plane and “fell ill” with the sky. At the age of 15, the boy went to the front of the First World War as a student of an aircraft assembly fitter. In 1936, he and his comrades made the first direct flight in history, almost 10 thousand km — from Moscow to Petropavlovsk-Kamchatsky, for which he received the Lenin Prize, the title of Hero of the Soviet Union, and Stalin’s personal thanks.
Address: Russia, Nizhny Novgorod, Minin and Pozharsky Square 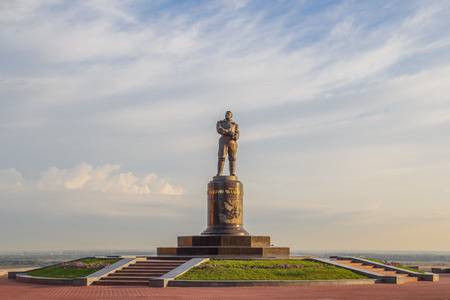 Shukhov Tower on the Oka River

The Shuhovskaya tower on the Oka is the world’s only hyperboloid multi-section transmission line support made in the form of a carrying mesh shell. Height is 128 m. It is located about 12 km from the city of Dzerzhinsk on the left bank of the Oka River, behind the village of Dachny. This is one of two surviving high-rise multi-section hyperboloid structures in Russia by engineer V. G. Shukhov, and the second is the Shukhov Tower on Shabolovka in Moscow. The Shukhov Tower on the Oka was built seven years after the tower on Shabolovka, and is recognized by Western experts as more perfect and worthy of being included in the World Heritage List.
Address: st. KIM 86, Nizhny Novgorod 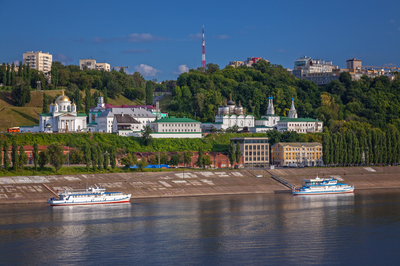