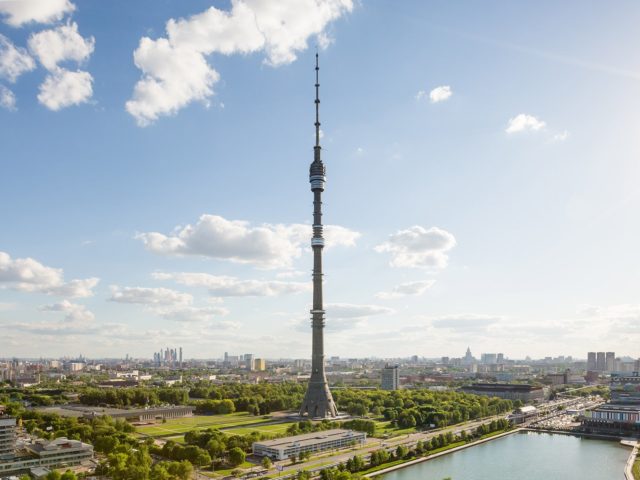 The Kremlin is certainly the main metropolitan attraction. He is included in the UNESCO World Heritage List. The red fortress is visible from almost every point in the center of the capital, so getting to it will not be difficult. Familiar from photographs from guidebooks red toothed walls with a length of 2235 meters cover the territory of 27.5 hectares. And although not all of it is open to visitors, for example, the entrance is closed to the presidential residence with a simple mortal. But it is worth allocating to visit the Kremlin with its many museums and architectural attractions built from XIV to the XIX century all day.
Red Square is an arena of many important events of Russian history and the history of the Soviet state, a place of mass demonstrations of the working capital and parades of the Armed Forces of Russia.
Even in ancient times, the area appeared on the eastern wall of the Kremlin, where lively trade was noisy. In the 16th century, it was called Troitskaya from the name of the church of St. Trinity, standing on the site of the Cathedral of Vasily Blessed. In the Middle Ages, fires often blazed here, so the square had another name – “fire”. Since the mid -17th century, it began to be called “red”, which in the Old Russian language meant “beautiful.”
Modern Red Square is a continuous stone, but it acquired this species only in the 19th century, and before that it was mainly wooden. The cobblestone area was completely panted in 1804. 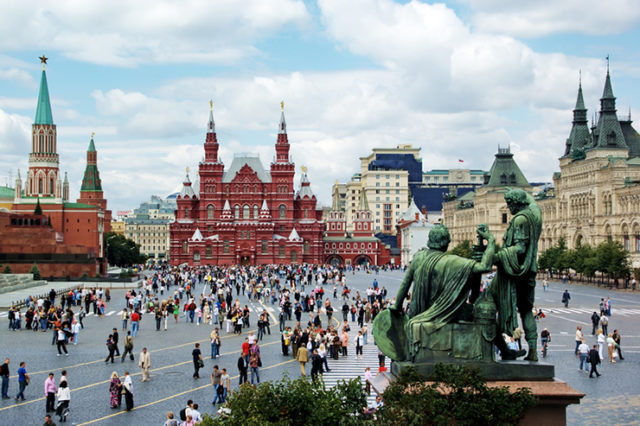 Alleys of the old park will lead from Red Square to the Kremlin embankment. The garden is part of the grandiose plan for the restoration of Moscow after the fire of 1812. This is a symbol of the revival of the capital, the memory of the victory over Napoleon. The picturesque memorial complex (the project of the architect Osip Bow) retained the original layout. The main entrance is still adorned with openwork gates with double-headed eagles. The symbolic meaning of the park resembles the “Italian grotto.” In addition to interesting historical objects, here you can see exquisite sculptural and landscape compositions. 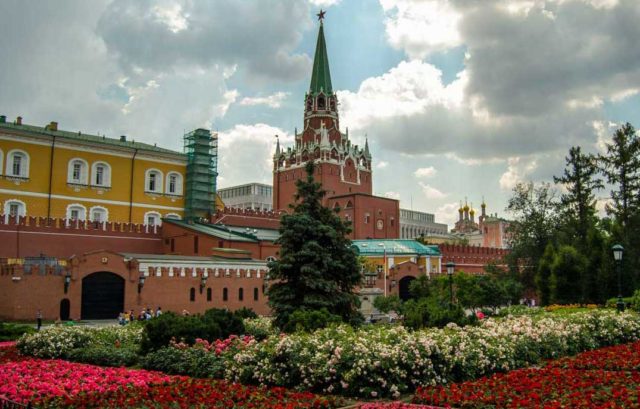 Moscow State University named after M.V. Lomonosov (Moscow State University) is one of the oldest classic universities in Russia, as well as the largest and lead center of Russian science and culture. He was named after Mikhail Vasilyevich Lomonosov in 1940. The building was erected in 1953, until 1990, its height is 183 m. (With a spire-240 m.) Thirty-seven years the main building of Moscow State University was the highest building throughout Europe and still remains one of the highest buildings in Moscow.
In the facade lining, different types of natural stone were used, two dials with a diameter of 8.74 m were installed on each towers. Exclusive details of the building of the building are huge thermometer and barometer. On the 32nd floor of the case there is a magnificent observation deck,
The central part of Moscow State University has 36 floors. In this part there are a rector, laboratories and general university audiences, libraries, food enterprises, etc.
The eighteen -story buildings with towers up to the twenty -fourth floor diverge from the central part. The nine -story sectors, also occupied by dormitories and a hotel, diverge from these sectors, also diverge. In the towers adjacent to the main building, residential apartments of professors and teachers are located. 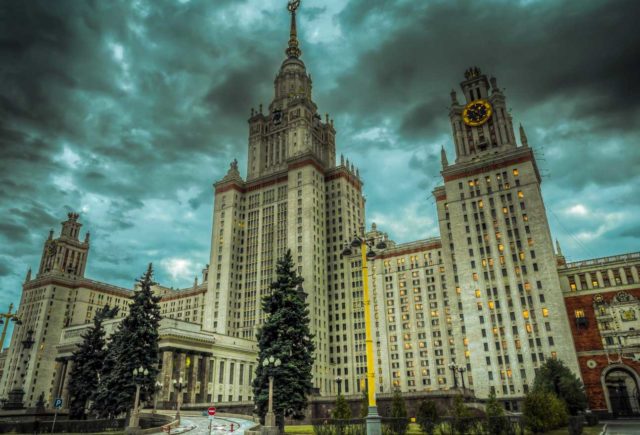 Gorky Park is the central park of the capital, whose territories are visited by more than 40,000 people on weekdays and 25,000 on weekends and holiday days. Since 2011, the park sets new standards, becoming the first world-class park in Russia, a space for recreation, sports, dancing and outdoor games.
the entrance is free
Opening hours: daily, around the clock
Address: st. Krymsky Val, 9, Moscow 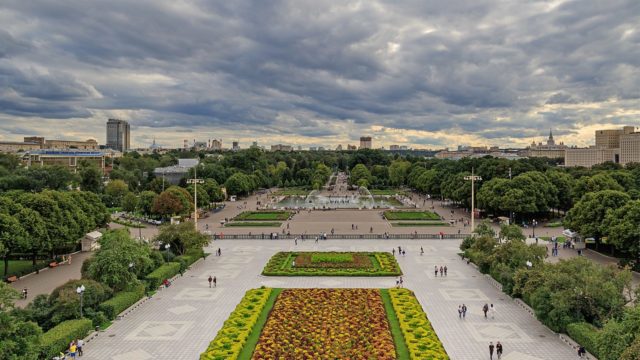 The Ostankino TV Tower is a television and broadcasting tower located near the Ostankino television center, not far from the VDNKh metro station in the Ostankino district of Moscow. Height – 540.1 m [1], as of December 2018 – the 11th highest free-standing facility
Opening hours: daily, 10: 00–23: 00
Address: st. Academician Korolev, 15, Bldg. 1, Moscow 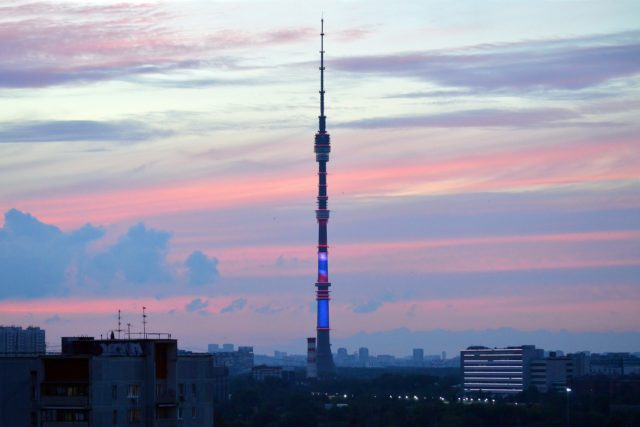 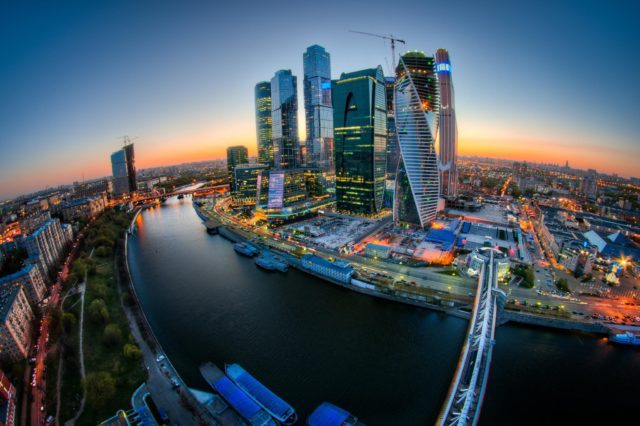 Cable bridge over the Moscow River, the highest bridge of this type in Europe. Located in the west of Moscow, part of Krasnopresnensky Avenue and Marshal Zhukov Avenue. Received the name of the adjacent picturesque street. Opened December 27, 2007. The author of the project is architect Nikolay Shumakov. 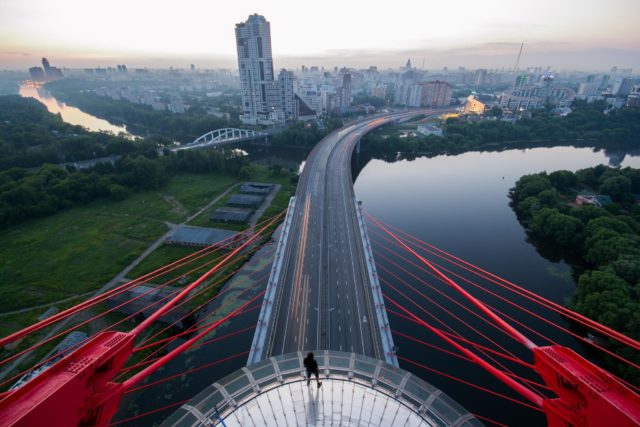 Tea House on Myasnѝtskaya (Tea Shop Magenta Perlova) is a three-storey building, used from 1893 to 1917 as a tea shop and apartment house. It was built in 1893 by the architect Roman Klein and belonged to the merchant Sergey Vasilievich Perlov. In 1895-1896, the house was rebuilt in a pseudo-Chinese style by Karl Gippius. After the October Revolution, the ground floor outlet continued to work, and the upper rooms were converted into communal apartments. From 2000 to 2012, there was a large-scale reconstruction of the building with the participation of the great-granddaughter of the first owner Zhanna Y. Kirtbay.
Opening hours: Mon-Fri 9: 00–21: 00; Sat 11: 00–21: 00; Sun 11: 00–20: 00
Address: 19 Myasnitskaya Street, Moscow, Russia 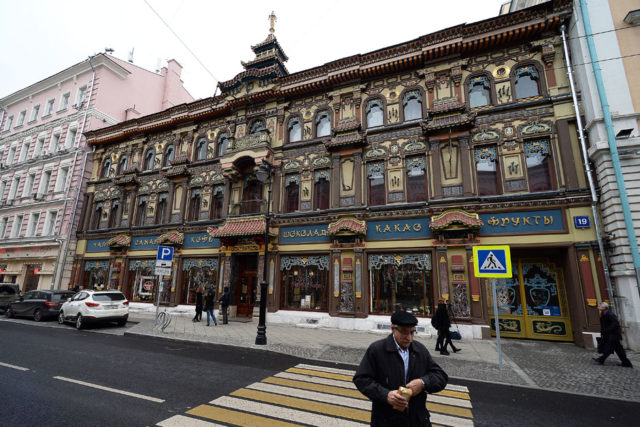 On the territory of the film studio “Mosfilm” was created the scenery “Moscow, XIX century” for the filming of various films.
Opening hours: Mon-Fri 9: 00–17: 45
Address: Mosfilmovskaya St., 1, Moscow 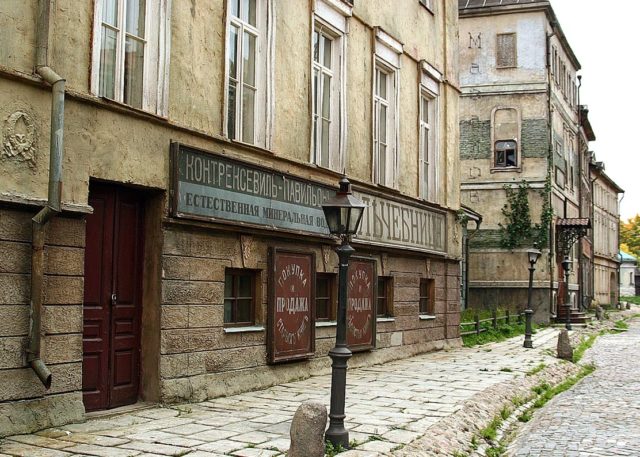 The house where Bulgakov Margaret lived

The house, located on Spiridonovka Street, 17, is a metropolitan landmark. According to some versions, it was here that Margherita from Bulgakov’s novel The Master and Margarita lived.
“… Margarita Nikolaevna and her husband together occupied the top of a beautiful mansion in a garden in one of the alleys near Arbat …”. So the author himself wrote about her place of residence. Indeed, many literary historians agree that the house on Spiridonovka is the house of Margarita.
Wonderful house built in the Gothic style by the architect Fedor Shekhtel for the millionaire Savva Morozov.
Today it houses the “Reception House of the Ministry of Foreign Affairs”.
Opening hours: Mon-Thu 13: 00–23: 00; Fri 13: 00–1: 00; Sat 12: 00–1: 00; Sun 12: 00–23: 00
Address: Bolshaya Sadovaya st., 10, Moscow 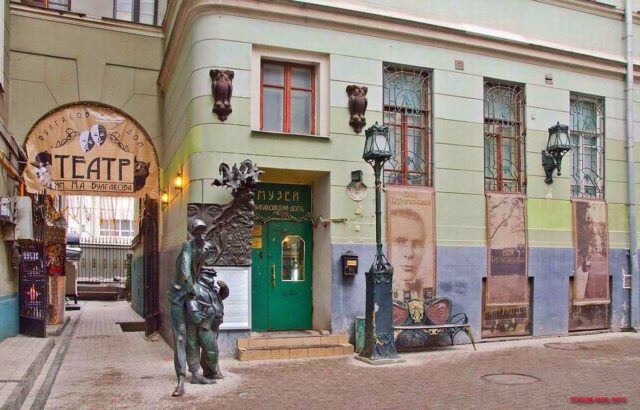 The history of the garden begins at the end of the 18th century, when Prince M. P. Golitsyn presented Moscow with a part of his estate (now along the Old Basmanna, 15). The garden was open to the public. In the 1900s, the parks of the Chulkov-Rostopchina (Novaya Basmannaya, 16) and Levashov (Novaya Basmannaya, 20) estates were added to the garden. In the current borders of the garden appeared in the spring of 1920 under the name Garden named after the 1st of May. At this time, the territory of the estate of the gold producer and tea merchant ND Stakheev (Novaya Basmannaya, 14; the Central House of Railwaymen’s Children was located in the buildings) was added to the existing garden. In 1922, the garden was renamed in honor of N. E. Bauman due to its proximity to Baumanskaya Street. An open concert stage, built in the 1920s and 1930s, works in the Garden, where Leonid Utyosov, Klavdiya Shulzhenko and other stars of the Soviet stage performed. Here was filmed by many loved the film “Pokrovskie Gate”. The symbol of the park is the bust monument of N. E. Bauman (1972), installed on the main avenue of the Garden. In winter, there is a skating rink next to the stage in the park, in the summer – bicycle rental, and there are also outdoor trainers in the Work-out zone.
In the summer, free yoga classes, fitness, dancing and much more are organized for visitors to the Garden. It hosts some of the best Moscow open-air music festivals, clothing stores, editorial boards of famous publishers, free Spanish classes, jazz Thursdays and more. Also on the territory of the Garden. N.E. Baumana is located one of the best children’s centers CityKids and the Children’s House “Fanny Bell Lodge”, where in the summer there are two urban summer camps for children from 3 to 14 years old. A large number of cafes and food outlets allows you to relax in the shade of the trees after a walk or have a snack on the summer terrace.
Work time: 6:00 – 0:00
Address: st. Old Basmannaya, 15, Moscow 105064, Russia 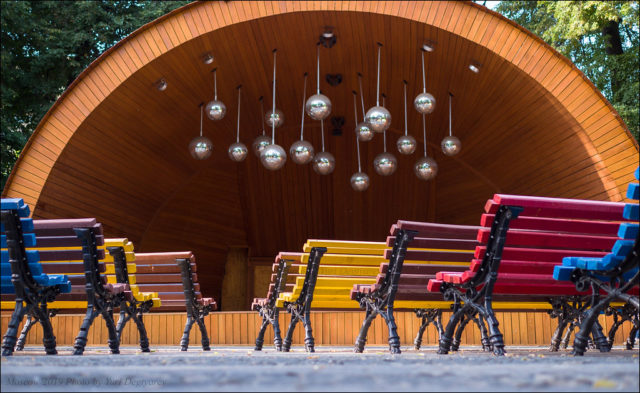 The botanic garden of Moscow State University is the oldest Russian establishment of its kind that still exists on its original site, and was founded by Peter the Great in 1706 as a Apothecary where medicinal plants were grown and studied by students of the Medical School. It was transformed into a botanic garden proper in 1805. The park has approximately 200 types of shrubs and trees, some of which are 300 years old, and the collection in includes a willow that is the oldest tree in central Moscow and a larch planted by Peter the Great himself. TheGarden’s orangeries contain a large collection of tropical and subtropical plants, many of which were donated to the garden at the beginning of the 19th Century
opening hours: daily, 10: 00–21: 00
Address: 129090, Moscow, 26 Prospect Mira 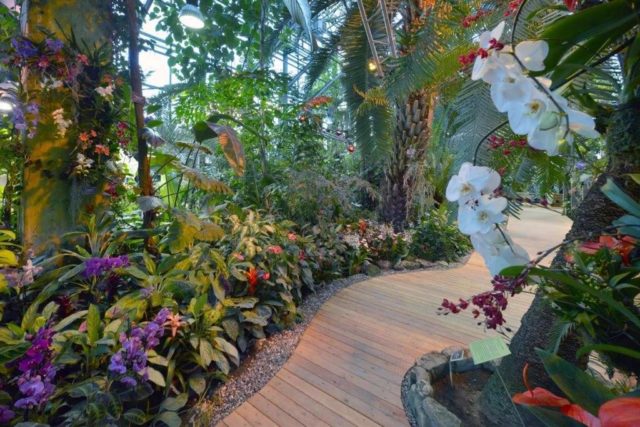 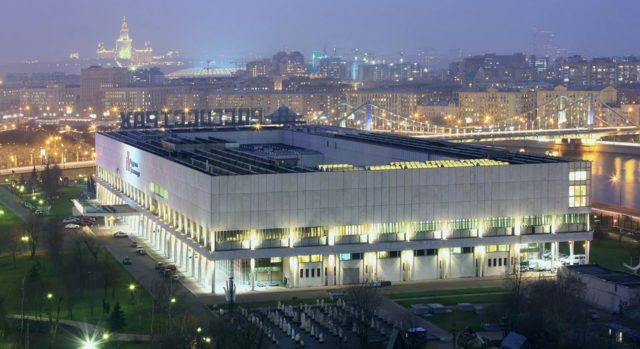 The wall of Tsoi is a part of the building that is written in hundreds of different phrases, pictures and symbols. And the overwhelming majority of them are dedicated to the soloist of the Kino group, who died in 1990. Many of the inscriptions are unreadable – the effect of the weather. Some are difficult to disassemble, as something new is applied on top of them. However, such chaotic art looks very strong and attractive, so almost anyone passing by considers it their duty to take a photo against the wall.
Opening hours: daily, around the clock
Address: st. Arbat, 37 / 2s6, Moscow 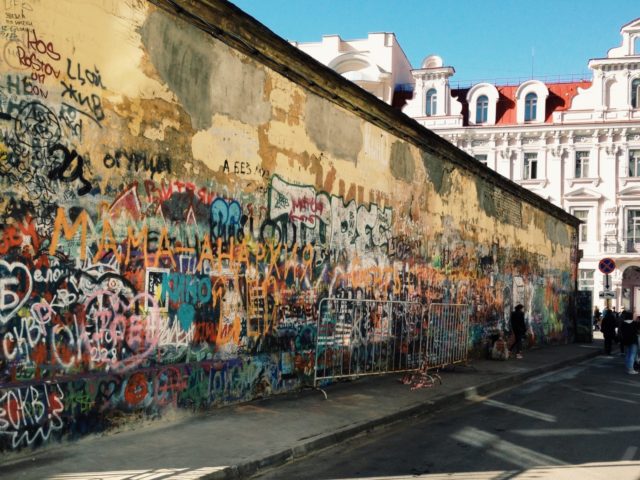 The main advantage of the viewing platform of the Russian Academy of Sciences in the absence of a large flow of visitors. It is located not far from the most popular observation deck on the Sparrow Hills, but either because it’s farther from the subway, or just fewer people know about this site, but there are always fewer people here.

The proximity to the Sparrow Hills allows you to look at the same beauty, only from a different angle, no less picturesque.
Opening hours: daily, around the clock
Address: Leninsky Prospect, 32A, p. 1, Moscow 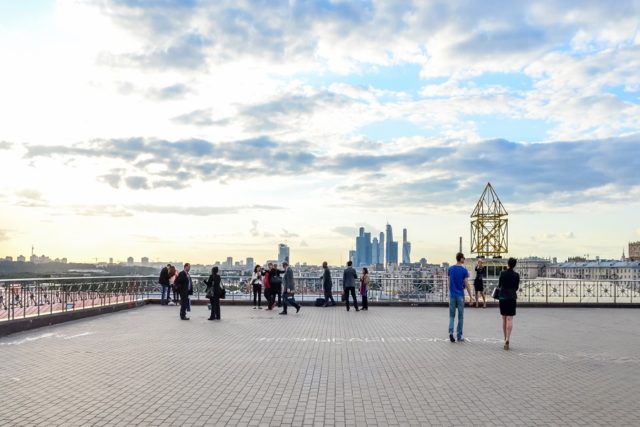 The Cathedral of the Immaculate Blessed Virgin Mary is the neo-Gothic cathedral in Moscow, the largest Catholic cathedral in Russia, the cathedral of the archdiocese of the Mother of God, headed by the archbishop Metropolitan Paolo Pezzi. The third Moscow Catholic church built before the revolution of 1917, one of the three currently functioning Catholic churches of Moscow, along with the Church of St. Louis and the Church of St. Olga.
Opening hours: daily, 8: 00–20: 00, break 12: 45–15: 30
Address: 27 / 13s1, Malaya Gruzinskaya Street, Moscow 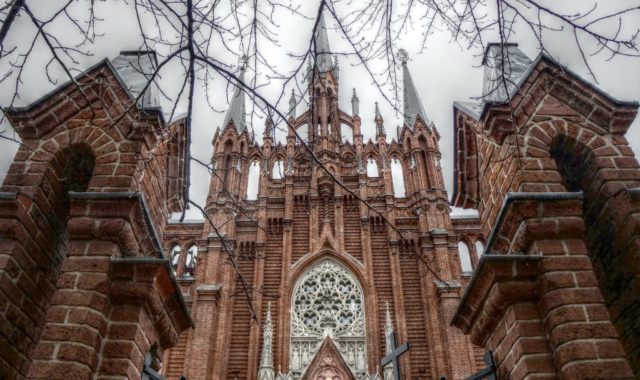 Design-factory Flacon is the best creative cluster of Moscow according to kudago.com… in 2016, developing a wide range of projects in the field of actual forms of creativity, education and creative industries.
“Flacon” unites on its territory a community of people whose main activity is creative and design in all its manifestations. Established in 2009, the design factory became the epicenter of the cultural life of the capital and significantly increased the attractiveness of the surrounding area.
The design plant originated on the territory of the former crystal glass factory and became a pioneer in the revitalization of the industrial zone outside the historical buildings of Moscow. The initial absence of the framework largely determined its specificity. “Flacon” has become a powerful platform for the development of young projects, the self-expression of creative individuals and the implementation of socio-cultural initiatives. It is not by chance that the atmosphere of “Flacon” fully corresponds to its motto: “Do what you want!”
Address: Bolshaya Novodmitrovskaya St., 36, Moscow, Russia (fl. 2) 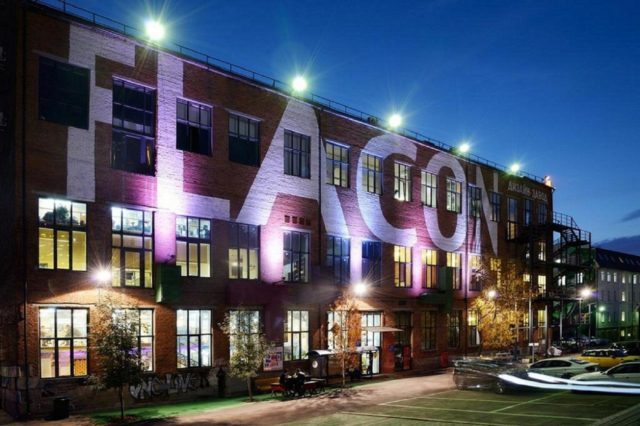